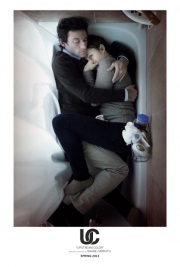 Full disclosure – you almost certainly won’t quite understand Upstream Color’s narrative while you’re watching it. We didn’t; we had a grip on about 40%, at a push. The berk behind us, who loudly exclaimed “UH YEAH I TOTALLY GOT ALL OF IT” to a girl who was trying to climb deep inside her Blackberry? He wasn’t even close.

Here’s what should be apparent: Kris (a phenomenal Amy Seimetz) is struggling to deal with a traumatic event that has left her penniless and emotionally unstable, as well as bringing her into the cycle of a strange, ageless organism. Through a new, tentative relationship with fellow lost soul Jeff (director/polymath/Christ-incarnate Shane Carruth), she begins to piece together her life as their identities merge and reality becomes, well, relative.

But Carruth isn’t giving up any information easily. Upstream Color almost entirely eschews conventional narrative structure, and is composed largely of flipbook montages, fragments of scenes and surreal imagery; fans of Doug Trumbull’s work on 2001 and particularly The Tree of Life will find themselves in familiar but even more impenetrable territory, as will those who’ve wrapped their brains around Carruth’s comparatively straight-forward debut feature Primer. The story is revealed through clues hidden in repeated motifs – the colour blue, insect larvae, Henry David Thoreau’s novel Walden – and the relevance of a lot of it will only become clear further down the line, following reflection or even, frankly, from a quick scan of the surprisingly helpful Wikipedia page. It’s arguable that a complete “solve” is impossible, but it’s also beside the point; the joy is in taking hold of loose strands and tying them together in a way that feels right to you. It’s an art installation at the very furthest reaches of impressionism.

Like a lot of great art, Upstream Color is less about story-telling and more about creating a fertile environment for thought. Processing it all is such a pleasure because Carruth’s direction is so sensual and considered, his imagery so unapologetically gorgeous (and in places, sentimental – but never cloying). The soundtrack (Carruth again), by turns ambient and maximalist, is so beautiful and so precisely synced to the visuals that the effect can be overwhelming in the truest sense – it rushes over you, engulfs you. As a result these snapshots are oblique but rarely dull, and though their actual significance is sometimes not immediately apparent, they all at least seem important. And they linger, so that puzzling them over afterwards is surprisingly simple – like flipping through a photo album.

Is it pretentious? Anne Bilson (The Telegraph) put it very nicely: “My Shorter Oxford Dictionary defines “pretentious” as “making claim to great merit or importance, esp. when unwarranted.” I’m not sure Carruth makes claim to great merit or importance; I think he just made the film he wanted to make, and then put it out there to let audiences, in their turn, make of it what they will.” It’d be easy to level accusations of snobbery at Carruth for creating something so deliberately impenetrable. But it’s all subjective. You may switch off immediately, or during a slightly tortuous stretch around the halfway mark; the film’s inability to engage more than the most dedicated viewers could see it considered a failure as a piece of cinema. But the scale and universality of its subject matter and its huge, open heart – they’re cinematic in the truest sense.

It’s been five days since I saw Upstream Color and I’ve been able to think of little else since. My default ambient headspace music has become shimmering chimes and swathes of distorted organ. It might just be the weather, but everything feels more inviting, and important, and calm. That’s its power, I think. It opens you up. In a sense, I’m still watching it.