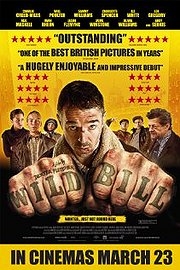 Batman, Spider-Man, the Avengers – the multi-billion dollar franchises are out in force this year, dominating 2012’s release schedule like Nicolas Cage looming over a frightened screenwriter and making him write more gunfighty sex scenes. You might be forgiven for assuming that there’s no room for plucky little films from less well-established directors, but if you do you’re a fahkin’ mug. Coming hard on the heels of the thoroughly impressive sci-fi debut Chronicle, Wild Bill has got ‘British film of the year’ written all over it. After eight years in the Big House, once-celebrated East End hard man Bill Hayward (Creed-Miles) heads home to Stratford, which in his absence seems to have become a nesting ground for futuristic stadia. His wife and kids no longer seem to live in the flat he remembers, so he heads to the pub and immediately falls back in with his old crowd. “The usual, Bill, is it?” asks the landlord. “Ten pints, two grams and a punch-up.” Bill’s pals carry him back to his block, and (five minutes of hammering on the door later) it turns out not to be empty at all – their mum might have pissed off to Spain, but Bill’s two sons Dean (Poulter) and Jimmy (Williams) are still living there alone. “Where am I?” groans a very hungover Bill the next morning. “We’ve been wondering that,” replies Dean, “for eight years.”

Bill wants nothing more than to push off and work on an oil rig, and local boss T (Gregory) is equally keen to get rid of a potential rival for top dog. But when his social worker (Olivia Williams in a spectacular wig) gets wind of his sons’ situation she refers the family to Child Services, and Dean isn’t about to get put into care. At 15, he’s already quit school and got a job to support 11 year old Jimmy, and he threatens to get Bill sent back inside if he doesn’t hang around for long enough to fool their overzealous social workers (Jaime Winstone and Jason Flemyng). Bill reluctantly agrees to put in a few weeks of Dad duty, and discovers that there’s an unexpected satisfaction to be had in doing things other than ‘itting people. Meanwhile, however, Dean’s got girl problems and Jimmy’s Saturday job as a 4’ drugs mule is threatening to really get in the way of his homework. Is Bill the family man still Wild enough to fight his corner? Wild Bill isn’t even out yet and I’ve already seen it twice. I can’t think of many higher accolades (that’s bollocks, obviously, but I don’t make the Oscars), particularly for a film which at first glance could be mistaken for one of the many Guy Ritchie-inspired disasters which flooded the market post-Lock Stock. Director Dexter Fletcher starred in the latter film, but its similarities to Wild Bill end there. This is unpredictable British drama par excellence – although the thumping boots, jangling keys and creaky cell doors of the opening titles scream ‘just another prison flick’, few films have ever reinvented a genre so confidently and with such gritty style.

I lack the space to dissect the entire cast’s performances, so let’s just acknowledge that they’re generally excellent – oddly, one of the few bum notes in the entire film is Andy Serkis’ stilted, David Brent-inspired cameo as local kingpin Glen. Charlie Creed-Miles is utterly engaging as the worn down ex-con who slowly tries to remake himself into someone his sons can be proud of, and Fletcher’s light hand on the tiller gives him room to extemporise and truly fill the character out. Brief, otherwise inconsequential moments (Bill struggling to read a custody agreement or wryly observing to Jimmy that “twenty years ago I was hiding in the same places as you”) give us glimpses into his former life, making it almost impossible to dislike a man who was, after all, banged up for attempted murder.

Will Poulter cements his status as one of the rising stars of the British film industry with a furious and deeply moving performance as desperate teenager Dean, whilst Sammy Williams’ Jimmy is gruff and gutsy in that way small boys seem to manage better than even the grimiest gangster. Liz White’s obligatory tart with a heart is utterly fucking lovable, and Iwan Rheon (Misfits) provides light relief as crazed crackhead Pill. The story flits between menacing gangster film and engaging family drama with aplomb, never feeling as stilted as it easily could have done, and a fresh and upbeat soundtrack combines with breathtakingly evocative cinematography (including the single most exquisite shot I’ve seen since American Beauty) to draw the audience into the unglamorous but deeply real world of Fletcher’s Stratford. Whilst watching Wild Bill I was reminded of films as varied and dissimilar as Sket, Mrs Doubtfire and Of Gods and Men, to name just a few. Take a moment to consider those films – anything that contains traces of all of them should by rights be a heinous mess, but somehow this is anything but. It takes a prodigious talent to blend emotion, action, humour and suspense with such deftness, and Dexter Fletcher really has it in spades. What a shame he’s taken so long to get behind the camera – still, if his sophomore film can maintain the standards of his debut then we’re in for a treat.

Previous: A Gang Story
Next: MGM loses money on Girl With The Dragon Tattoo