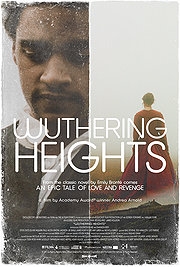 As we recently discussed, classic novels tend to get filmed over and over, until we can no longer read them without seeing Michael Fassbender’s face. When done well, an adaptation of a familiar text can be a great success – most of the time, though, these great successes are long TV serials (the 1995 Pride and Prejudice, the 2005 Bleak House) not films.

The main problem with a feature length adaptation of a novel is that, somewhere along the line, significant cuts have to be made. Arnold gets around this by focussing only on the first half of Cathy and Heathcliff’s story, meaning she is free to concentrate on their childhoods – often glossed over by other adaptations. The result is a long, thoughtful, quiet film that lacks the vigour and melodrama of other versions, but is so unique that it ultimately makes for a compelling watch. As a young teenager, Heathcliff (Solomon Glave) is rescued from the streets and taken home by a stranger, Mr Earnshaw (Paul Hilton). He quickly forms a close friendship with Mr Earnshaw’s daughter Cathy (Shannon Beer) but after their father’s death, Cathy’s brother Hindley (Lee Shaw) becomes master of the house and begins to treat Heathcliff as a slave. Cathy, meanwhile, befriends the wealthy Isabella Linton and her brother Edgar and grows distant from Heathcliff. Eventually Heathcliff runs away, returning some years later (played by James Howson) to seek his vengeance.

Arnold’s film is keen to distinguish itself from versions that have gone before by – for instance – casting a black actor as Heathcliff. Most significant, though, is the decision to concentrate on the main characters’ younger years for the majority of the film. Arnold’s depiction of Cathy and Heathcliff’s childhood bond is in keeping with the uneasy alliance portrayed in the book. In short, she doesn’t shy away from the slightly icky details of their co-dependent relationship, but rather illustrates their violence and wildness early on – such as having Cathy lick the wounds on Heathcliff’s back after he has been whipped. In general, Arnold’s direction is beautiful, zoning in on the minute details of life: dewy cobwebs, muddy boots, the sound of the wind rushing across the moors. While most adaptations focus on the Gothic, rain-streaked elements of the setting, Arnold celebrates the changing seasons, the sunlit days and the snow-covered moors. There are also some exquisitely filmed moments between the two leads: Heathcliff sitting behind Cathy on a horse and leaning forward to smell her hair; the adult Heathcliff coming to find Cathy at her new home and waiting for her in the sunlit, misty orchard.

Unfortunately, this film often feels swamped by its direction. And while the performances of the child actors are strong – particularly Beer’s – the supporting cast is largely weak. Most notably, Howson seems uncomfortable in his role as the adult Heathcliff and his performance lacks the vigour and rawness that the character is traditionally associated with. Against Kaya Scodelario’s performance – which captures Cathy’s edgy, violent, spiteful streak – Howson’s performance is a little underwhelming. The main problem with this film, though, is that its naturalism – which worked so well in Fish Tank and is at times this film’s greatest strength – means that some of the best parts of the novel are either absent or delivered awkwardly. Arnold is generally good at coaxing realistic performances out of first time actors, but when they deliver some of Brontë’s classic lines the effect is jarring and feels, at times, almost insincere.

Fundamentally, Arnold’s Wuthering Heights never feels a great deal like Wuthering Heights. It resembles more a loose reimagining which is interesting on its own terms, whilst also grasping some aspects of the novel in perfect detail. It’s not wholly successful in its aims, but Arnold’s film is brave, unique and so different to any adaptations that have gone before it that it’s definitely worth a watch.

Previous: On The Adventures of Prince Achmed and the silhouette film
Next: Monday Mash-Up – Santa Special