Judge Dredd may not be the most universally known comic-book character, but his violent adventures in sci-fi comic 2000AD have built him a passionate and devoted following over the past thirty years. Sylvester Stallone and company courted the wrath of those fans with their poorly received adaptation in 1995, but director Peter Travis and screenwriter Alex Garland (28 Days Later) have set out to right those wrongs with a new version.

Dredd is set in a post-apocalyptic future where cities have conglomerated together to form huge, sprawling Mega-Cities, with the “cursed land” beyond their walls rendered inhabitable by some unnamed disaster. In Mega-City One, an over-populated, violent, drug riddled nightmare of a place, only a force of ‘Judges’ – who perform all aspects of the justice system at their own prerogative – stand between civilisation and total chaos. Remorseless and unflappable; your best bet is to simply stay out of their way. Most remorseless and unflappable of them all is Karl Urban‘s Judge Dredd.

Assigned to babysit rookie Judge Anderson (who comes complete with handy psychic abilities) on her assessment day, Dredd and his young ward follow the trail of some dead bodies and find themselves trapped in a sealed tower-block run by crime-lord MaMa. (Lena Heady) When they capture one of her lieutenants (Wood Harris), she sends a small army of criminals to deal with them and reclaim her man. All during poor Anderson’s assessment; the equivalent of going for a driving test and ending up in the middle of a Demolition Derby. 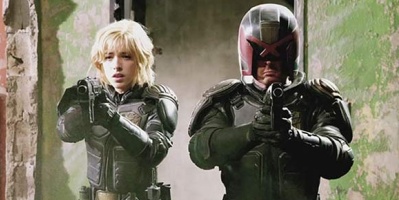 Sound familiar? It should. It’s the exact plot of Malaysian masterpiece The Raid, which came out only months before. That they share the exact same premise is an unfortunate coincidence, and it leaves Dredd less fresh than it otherwise might have seemed. And where The Raid featured genuinely tense scenes of our heroes creeping through corridors in silence, Dredd fails to capture any such tension, and it all gets a bit boring.

There’s also the fact that The Raid‘s fists were far more exciting than Dredd‘s guns. Despite attempts to liven up the gun-play with incendiary rounds, gas bombs and a particularly devastating machine gun, audiences have become blasé about shoot-outs. The electric martial arts of The Raid were – appropriately – like a kick in the face that Dredd just can’t deliver.

What it can deliver, is a few innovative technical flourishes, including some of the best 3D work of the year. Slo-Mo, the drug that MaMa is flooding Mega-City One with, alters the user’s perceptions, making time pass at 1% its normal speed for the user. The effect is brilliantly captured in super-slow motion, as shards of glass dance poetically across the screen and the violence becomes balletic in its beauty. If you can picture those ultra slow-mo shots of our brave Olympians that the BBC were so fond of last month, you’ll have some idea. Just add violence.

Karl Urban gives a good performance as the titular Dredd, to the extent that the role will allow. Dredd is a stoic, violent, monosyllabic, single-minded law-machine, delivering ‘one liners’ with all the humour and self-awareness of a depressed mortician who’s stubbed his toe. There’s little attempt to expand or develop the character, but that’s okay; that’s the way Dredd should be; and Urban is excellent with what he is given. It’s a brave role to take, given that Urban never once removes his helmet throughout the 96 minute run-time. How many other Hollywood actors would accept a role where most of their face is hidden, and even their voice is altered? (Hardy who? Bane what?) 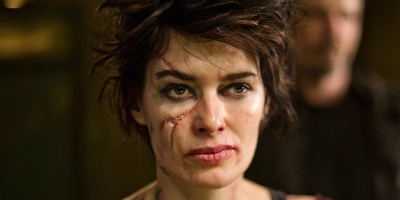 As the rookie Judge, young up-and-comer Olivia Thirlby is given the closest thing to a character arc, and her ethereal screen-presence serves her well. Elsewhere, Lena Headey can play crazy in her sleep, while Wood Harris (The Wire’s Avon Barksdale!) is lumped with what might well be one of the most thankless roles in recent cinema history.

Unfortunately, while the world of Mega-City One is a fascinating one, the trapped-in-the-building premise, while likely budget-saving, also limits the film’s avenues for creativity. What of this world’s myriad mutants? What do the oft-mentioned IsoCubes look like? What is outside the City walls? Dredd doesn’t have the scope to explore these issues, and instead is content to be – visual flourishes and good lead aside – a disappointingly by-the-numbers action film. There’s little here we haven’t seen before (and not just in The Raid), and with the lack of depth to the characters, it means there’s often very little to keep the attention. Competent, but disappointing, a sequel could remedy the film’s problems, and Dredd, despite its short-comings, is good enough to warrant the franchise treatment. Just.