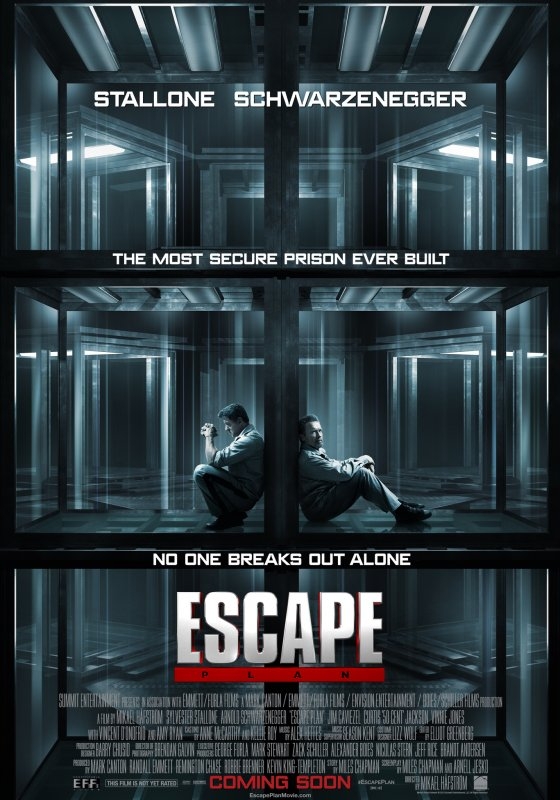 Stallone and Schwarzenegger together in the same film is never a bad thing, however it doesn’t exactly raise the bar in the action genre. The good thing about Escape Plan is that it never pretends to be anything more than what it is: two action legends beating the snot out of each other and blowing things up. If that is what you’re looking for in a film then this movie is perfect.

Sly plays Ray Breslin – a highly-intelligent man who has made a career for himself designing, building and then breaking out of high security prisons for a hefty fee. When he and his associates are offered twice their going rate to evaluate a prison for the world’s deadliest criminals, The Tomb (originally this film’s title), Breslin jumps at the chance.

However when Breslin’s pre-arranged evacuation code to free himself fails to work, what was first thought to be a routine job turns out to be much more. Teaming up with mysterious inmate Emil Rottmayer (Schwarzenegger), Breslin must escape the clutches of the sadistic Warden Hobbes (Person of Interest star Jim Caviezel) and get revenge on those who tried to bury him.

Ultimately, Escape Plan is two action movie legends having a blast. The chemistry between Arnie and Sly is evident, despite their characters’ initial distrust of each other. However their legendary status means the film does become self aware: “You don’t look very smart” Rottmayer tells Sly’s super-smart (ha!) engineer-come-writer Breslin who replies “Neither do you”.

On the surface, Escape Plan screams straight-to-DVD movie: the plot, the casting of Curtis ’50 Cent’ Jackson, and the overall look of the film don’t help. If it weren’t for the big name leads you could forget that you are watching a film that cost millions to make. That’s not necessarily a criticism. After a summer of CGI-superheroes, the raw fisticuffs and frenetic shootouts that pepper this film are refreshing.

What also works is the claustrophobic feel of The Tomb. Prisoners are stuffed into cages like so many rats and left to destroy themselves at will; violence is displayed regularly by the guards (even murder) but violent inmates are locked in a minuscule room with a white-hot light concentrated onto their faces. Remember though, the aforementioned inmates are meant to be the world’s most dangerous men – should we care that they’re treated badly? Escape Plan doesn’t ponder this social question, not when choke-slamming (not a euphemism) and elbows to the face could be going on.

Breslin’s backstory is a glaring attempt to make Escape Plan much more than what it is, and it fails. Until Stallone plays a shy postman who wears tweed jumpers you will never make a character he plays vulnerable (and even then it might not work). The Tomb’s wardens, including Vinnie Jones in a forgettable bit-part, try their best to break Breslin into a self-doubting mess, but it’s hard to buy. Sylvester Stallone simply isn’t broken. He never fails. The same goes for Arnie’s Rottmayer. You can give him a salt and pepper beard and have him pinned down and tortured but again, this is Dutch from Predator and he’ll be fine.

Caviezel (having a blast) and his butterfly-bothering baddie almost steal the show. The lovechild of Agent Smith and Cyrus the Virus, Hobbes is nuts and delightfully devoid of feeling. You’d have to be when keeping the world’s most dangerous lawbreakers under control. The man who once played Jesus needs to move off the small screen pretty soon.

The script isn’t sparkling, but who needs profound when Rambo and The Terminator are sharing the screen? It is wryly funny though, with plenty of quotable bits. I can’t wait to tell someone they hit like a vegetarian, or to use “Have a nice day, asshole” as a goodbye.

Escape Plan would be a dreadful film if the two stars were not so well known, but Sly and Arnie’s A-list status put the directing and cast in the shade. See this as a wide-eyed action fan and be satisfied, but don’t expect anything more.