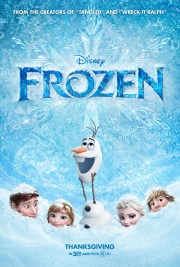 If we were big dogs at Disney, we would have promoted Frozen until we bled ice shards – it’s that brilliant. Exquisitely constructed, a divine visual and unexpected in myriad ways, Disney has given us one hell of a Christmas present for 2013. 90 years after they brought us the silent Alice’s Wonderland, The Walt Disney Company has finally made a film they needn’t feel guilty about (except The Lion King. The Lion King is, was, and will always be flawless).

Frozen is a story of sisterhood, first and foremost. Elsa (Idina Menzel) and Anna (Kristen Bell) are two princesses of a mythical kingdom called Arendelle. However, Elsa’s magical powers quickly overwhelm her family, and force her to isolate herself from both them and her kingdom. When Elsa comes of age, an outbreak of eternal winter drives her to flee Arendelle, so Anna takes it upon herself to find her sister and bring her home. Anna’s supporting cast is the usual ragtag bunch – ice salesman Kristoff (Jonathan Groff) and his reindeer Sven, a snowman called Olaf (Josh Gad) and the mildly entertaining Duke of Weaseltown (Alan Tudyk). Rounded out by the curiously floppy-haired Prince Hans (Santino Fontana) and Frozen initially just looks like Disney continuing to be a cookie-cutter hitmaker. But keeping the plot simple – save for one genuinely quite surprising twist – allows all the extras to really shine.

One such extra actually comes before Frozen even starts. Caught between history and innovation, the film is preceded by one of the cornerstones of Disney’s history, the black and white short cartoon. It starts as a charmingly dated tale of dastardly deeds flouted by good-natured hijinks, but quickly turns into one of the finest pieces of cross-generational animation we have ever seen. It’s a display of digital genius with an ego the size of Mickey Mouse’s shoes, but the whole cinema applauded afterwards. To that end, if you see Frozen, see it in 3D. If not for the adorable inevitability of seeing a small child reach out into a flurry of snowflakes hoping to grab one, do it because Disney has absolutely outdone itself technologically – it’s just indescribably gorgeous.

So too is Frozen’s music. Our screening was packed with under-10s, hopped up on advent calendar chocolate and the invincibility of youth. After Idina Menzel’s first number, the stellar Let It Go, they were reduced to a silence that was almost breathless – you couldn’t even hear popcorn being crunched. Disney’s music hasn’t been this good since the heyday of Beauty and the Beast et al. The songs have that indefinable thing where people were legitimately singing along after the first verses of all the songs; some will call it predictability, we call it unmatched deftness of writing and composition. Also, having seen Wicked! more times than we care to admit, we need devote a line or two to Idina Menzel, the production’s original Elphaba, Wicked Witch of the West and queen of our hearts at BFF Towers. Her voice is instantly recognisable if you’ve ever heard Defying Gravity, and Elsa has the same sassy gumption as that character does – you’re in love the second she opens her mouth to speak, and Frozen wouldn’t be the same without her.

Speaking of Elsa, here’s something unusual; Frozen is downright sexy. Elsa’s a minx. And the only reason it isn’t sexist and gratuitous is because one of Elsa’s defining characteristics is that she is all alone. She winks and grins at the viewer, transforming her Downton Abbey gown into a slinky strapless number with a slit and stilettos, deliciously tarting up all over her self-made palace, and it’s not for anyone to enjoy other than herself. This, from The Walt Disney Company, who practically invented the makeover montage, and the someday-my-prince-will-come-so-why-don’t-I-just-brush-my-hair-and-virtuously-lust-until-the-aforementioned-someday trope.

Meanwhile, Anna is the sort of princess who doesn’t know if she’s elated or gassy – her words, not ours. She’s less Stockholm Syndrome-y than Belle, less self-pitying than Cinderella but doesn’t kick ass quite as hard as Mulan, which makes her likeable to a fault. She’s clearly a state, and refreshingly, she doesn’t even have a superpower disclaimer to make up for it – she’s just a nice, pretty girl who loves her sister. Like Marvel’s hero-to-the-core Thor, less happy people than us could judge Anna as being one-dimensional, because she’s only really good for one thing, and that’s love of her sister. But like Thor, we think it’s ballsy to allow one personality trait to so wholly direct a character’s words and actions, but still be interesting to watch.

Frozen has taken the best motifs of the 90 years of groundbreaking filmmaking which precedes it – diehard Disney fans will recognize each and every riff on Disney’s classical past. But one key difference is that in 2013, albeit right at the end, has brought us Disney’s first feminist feature film. We might be alone in saying it out loud, but as Elsa says, the cold never bothered us anyway.

Why Frozen is a bad movie