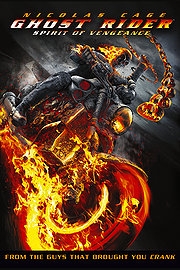 At a preview screening of Ghost Rider: Spirit of Vengeance in the states, an attendant was allegedly overheard saying that Mark Neveldine and Brian Taylor’s in-name-only sequel to the 2007 Marvel carcrash (or bike crash, whatever) “made the first one look like The Dark Knight“. I’d like to go further – this gluey, flopping miscarriage of a film makes Abduction look like Citizen Kane. Someone needs to go back in time and drown Nic Cage as a child. In EASTERN EUROPE, a motorcycle is chugging along a mountain road. Is it the GHOST RIDER? No, it’s drunk French priest Idris Elba, trying to persuade some monks that they’re about to get shot. They get shot. Idris Elba wants to find some kid or something (priests, eh?) but he escapes with his mum, Sarah Connor (Placido) and they drive away. The bad men what done the shooting nearly catch them but Idris Elba shoots their bad car while he’s falling off a cliff, so that’s okay. Elsewhere in EASTERN EUROPE (seriously, that’s what it says onscreen), Johnny Blaze (Cage) is sitting in a room. CUE FLASHBACK!

Blaze, as an utterly dreadful anime cutscene demonstrates, sold his soul to the devil during the (otherwise unreferenced) first film in order to save his dad’s life. Unfortunately for him, the devil is a tricksy fucker and Blaze ended up possessed with an ancient demon which eats the souls of evildoers for a living (it’s like working in Lidl, someone has to do it and it may as well be someone you already hate). The upshot is that every once in a while Johnny turns into a massive skeleton covered in fire and kills everyone, which is why he’s come to Romania where it’s much cheaper to be a demonic twat.

Idris Elba, who survived falling off that cliff by landing in a tree upside down (TRUTH) turns up and tells Johnny he needs to rescue that kid (Fergus Riordan) because he’s the Antichrist and the Devil is totally wandering around waiting to spunk his nasty devilish soul into him – apparently inhabiting the body of Ciarán Hinds is proper dull. All Johnny needs to do is stop Danny being a) raped by his devil daddy b) captured by his mum’s ex-boyfriend, who’s some sort of cross between the Twins from The Matrix Reloaded and muscular dystrophy or c) ritually slaughtered by Christopher Lambert, who’s covered in tattoos and obviously wishing the Highlander money hadn’t finally run out. Should be easy, yeah? Yeah? Fucking hell, are you asleep already? This may well be the statement that will come back to bite me in the arse, but I just can’t see how Nicolas Cage could possibly get worse than he is in Ghost Rider: Spirit of Vengeance. It’d be nice to believe that he’s being self-parodying and wry and so on, but I genuinely think the man who won an Oscar just seventeen years ago has permanently lost his way – Cage’s sophomore performance as Johnny Blaze veers back and forth between monotonous and lunatic like a rapist who can only really get his rocks off if he talks about quantitative easing between thrusts. “HE [the Rider] IS SCRATCHIN’ AT THE DOOR, MAN,” Cage howls at some poor fucker who’s got in his way, “AND HE WILL EAT YOUR SOUL!”. About five minutes later he clumsily brushes at Danny’s forehead in what is apparently meant to be a show of compassion. Danny recoils, as would you or I. “There was a bee,” intones Cage, every word falling into place like a rogue incendiary bomb landing in a Baghdad slum. “I thought it was going to… sting your face.” Everyone else is shit to greater or lesser degrees, although I can’t really think of an actor whose performance wouldn’t be sapped by association with this utter garbage. Ciarán Hinds potters about with one bloodshot eye, arbitrarily doing bits of magic and mangling an American accent, and Violante Placido does her best Sarah Connor impression to absolutely no effect. Johnny Whitworth, who dies not once but twice (“I’ve brought you back,” grumbles Ciarán, “and I’ve given you the power… of decay.” Why?) is easily the worst supervillain of the past five years, and the hugely talented Idris Elba obviously realised what he’d got himself into and decided to just not give a tin shit about his performance or his ghastly French accent.

None of this matters, you’re thinking, because Ghost Rider is all about the visuals and the spectacle! Well, cram it up your cram hole. The CGI is unforgivably patchy, the 3D is headache-inducing, the way that Johnny morphs into the Rider is inexplicably psychedelic and the near-constant lapses into monochrome/strobing/animation/the Rider cavorting alone on a white background or pissing fire onto a black one are all gratuitous and ugly. Nobody has worked out how to animate flames properly yet. The bit where the Rider turns a giant mining machine into, like, a HELL MINING MACHINE WIV HELLFIRE is really incomparably stupid. The script reads like Twilight slashfic. Need I go on? At what point are we, the last bastion of sanity in a world which not only goes to see this utter fucking dross but pays Nic Cage to make more of the same, going to make a stand? Someone needs to point out – and I must stress that I’m not trying to be funny or outré here – that the master of Nouveau Shamanic is almost certainly suffering from a degree of mental illness. His assets need freezing, his CV needs shredding and if he tries to make Ghost Rider 3: Firebreath of Helltime then we need to have him killed. It really is that simple.