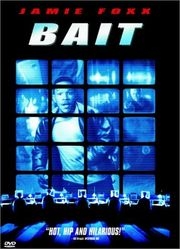 Welcome to Australia and one of its cities by the sea. Meet Josh (duck and cover as the Twihards squeal over The Twilight Saga: Eclipse‘s Samuel) who is being woken up to a hangover by fellow lifeguard Rory (Richard Brancatisano). Josh’s engagement to Rory’s sister, Tina (Vinson, whose only claim to fame is the god-awful Step Up 3D), has led to an engagement party that leaves Josh severely handicapped in his duties. While Rory picks up the slack by heading out to set the buoy, Josh scampers off to meet Tina who fleetingly mentions their move to Singapore. Cut to the water where a rotund gentleman’s swim is brought to a sudden and bloody halt in an unexplained shark attack. Rory, oblivious to the goings on, happily paddles away as Josh rushes to the rescue on a jet ski. Just as we think he’s made it, Rory gets munched on.

A year later, the engagement is off, Josh works at a supermarket and the sharks are back in focus, following a pod of migrating whales. While Doyle (wondering what McMahon’s been up to since Nip/Tuck? Now you know) and Kirby (Wyllie) plan their daylight robbery outside, Jaime (Tonkin) is shoplifting and getting her boyfriend Ryan (Russell) fired while Kyle (Lewis) gets diggity with Heather (Heine) in the car park. Officer Todd (Sacks) arrives to arrest his daughter and Tina returns from Singapore with a Steven (Yuwu) in tow. Suddenly, all hell breaks loose as Kirby takes Doyle’s in-and-out robbery into the realm of murder just before a tsunami sweeps through the town. As the survivors try to get their bearing in the aftermath, not one but two great whites glide into the scene. 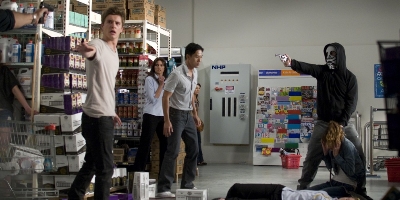 The one thing Bait does really well is setting up the circumstances which would place a Great White in such close proximity to a human population. At least one of the writers (there are 6 in total) thought ahead to include one line that explains why the great white are wandering around the coastal line. Basing itself in real events, the script amps up the drama by using a tsunami as their vehicle of choice for transporting their hunters to exactly where they want them. This hard won plausibility is wrecked however with the addition of a robbery that just makes no contextual sense and a few empty character sketches that either are ignored right after they are mentioned or so quickly resolved they provide no purpose. There are moments where its B-movie soul shines ever so brightly, leaving you shaking your head in awe at the sheer stupidity, but beyond that it possesses a good build up of suspense, some real intensity and even a few instances where you’ll find yourself kick out your own feet in panic. 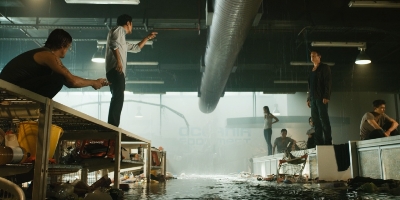 Even in this day and age, sharks are a difficult creature to re-create. Bait weaves together some glorious animatronics with some better than basic CGI, proving that the crew assembled by Rendall wasn’t just capable but also quite well-funded. By filming them in short bursts, he also gives you no time to examine them too closely which allows you to forget that they aren’t real and instead sink into the menace that they are meant to represent. As for the humans, eh! they’re alright. Samuel’s stint in Hollywood has resulted in delusions of grandeur with ’emotional’ scene his hammed up till your eyes ache from all the rolling. Vinson is only slightly better owing to the one scene in which she manages to convey post-traumatic shock convincingly. Oh McMahon, how far you’ve fallen. Understandable really, seeing as even here you do not much else but stand around looking tough and stoic. Wyllie is apparently Aussie so it’s a bit odd, that even with being surrounded by other Wallabies, his accent stands out like a fake sore thumb. Still, on the whole, everyone manages to emote fear when they have to and die well when they need to. 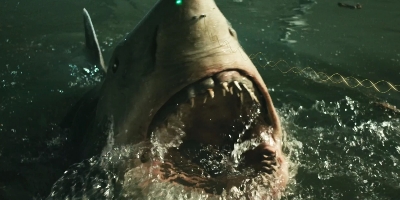 Among the plethora of B-movie shark movies out there, Bait breaks the surface as not a bad effort. With a number of elaborately gruesome kills, plenty of tense get-out-of-the-water panics and suitable fearsome sharks, it will keep soothe your hunger for mayhem and keep you well entertained till the end.

Previous: Joss Whedon’s Much Ado About Nothing gets a new trailer
Next: Orange(Wednesday)s and Lemons #111