I feel, in my bones, that I should have loved Dark Skies; not only does it marry the more traditional clichés of alien invasion with the tricky-to-handle topic of child abuse, but it also pays homage to the a handful of the greatest horror and sci-fi directors of all time – most notably Alfred Hitchcock.

And yet, despite all of that, I still came away feeling as if it was… well, a bit naff.

The film begins with sweeping shots of leafy-green suburbia; children are playing happily in the streets as mothers watch them fondly kitchen windows, toothpaste-smile fathers wave merrily from driveways as they return home from the office and, all the while, creepily ominous “aliens are coming at ya hard and heavy” music blares in the background. So much for subtlety, eh Scott Stewart?

It comes as no surprise to discover that typical suburban couple Daniel (Hamilton) and Lacy Barrett (Russell) have a dark secret; they’re late on their mortgage repayments. Yup, I’m completely serious; Daniel has been laid off from his job as an architect and realtor Lacy is struggling to make a single home sale. Throw in troubled teenage son Jesse (Goyo) and his increasingly disturbed kid brother Sam (Rockett) and you have a recipe for serious drama and angst. 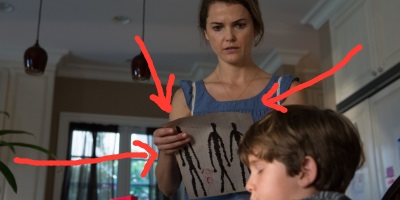 Or at least you WOULD had the director chosen to follow that path. But, instead of playing on the possibility that the upcoming household disturbances are a direct result of parent / child gone mad, Stewart Scott makes it pretty clear that aliens are behind it. Our first clue? Someone’s ransacked the fridge, eaten all the vegetables (leaving them in a predictable trail to the back door) and used items around the kitchen to create a strange other-worldly diagram.

To paraphrase the Ghostbusters: “no HUMAN would stack kitchen items like this.”

The aliens in Dark Skies, henceforth to be known as The Greys, are seriously unimaginative, having clearly gleaned all of their scare tactics from their expansive video library. They trick pigeons into divebombing the Barrett home (as seen in Hitchcock’s The Birds), they like to play havoc with CCTV equipment (hello unneccessary Paranormal Activity reference!), they sneak into the bedrooms of children (ding dong, The Sandman) and they like to trick females into self-harming (‘sup The Exorcist?). They also, rather like the aliens in Signs, have a few issues with locked wooden doors – despite the fact they’ve travelled millions of miles to get here AND secretly uploaded an electronic implant into the brains of our main characters – and they hate dogs. 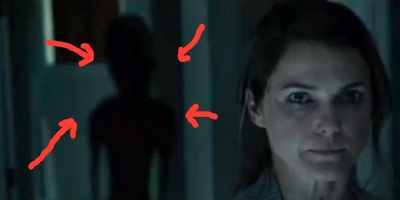 But WHY are they putting implants into peoples’ necks? WHY are they intent on destroying Keri’s credibility as an estate agent? WHY are they so obsessed with stealing children / photographs of children? And WHY, when the entire neighbourhood has seen a mass bird suicide attack on the house and a helluva lotta flashing lights in the sky, does everybody believe our previously upstanding residents of the community are beating their kids? It makes absolutely no sense. Plot holes gape open everywhere, loose ends are left flapping in the breeze and the lacklustre dialogue drags us through to a completely predictable ending. One which, sadly for everyone involved, we just don’t care about.

The aliens are unremarkable, looking exactly like every single bad space critter we’ve ever seen; think grey, tall and conical-headed humanoids, all of whom move with the ungraceful shuffle of a man in an oversized costume. And, while it becomes VERY obvious VERY early on that the parents are in no way responsible for the recent “inexplicable” bruises on their childrens’ bodies, there’s no denying that they’re still wildly neglectful. Firstly because they never noticed the very obvious “IT’S AN ALIEN VISITOR” drawings pinned to the fridge, but secondly because they are told, quite explicitly, to never let their children out of their sight if they want to save them from abduction. Geuss what they do? Like, all the time? Yep. 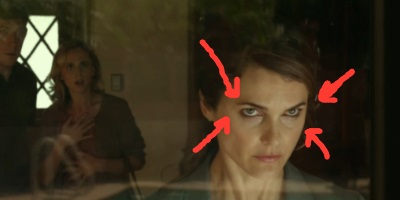 In short, Dark Skies is a completely uninspired alien invasion film, failing to bring anything new to the genre and completely eradicating any chances for originality very early on in the plot. However, thanks to that not-so-subtle sequel tip at the end, we have a sinking feeling that this will not be the last we see of these cinephile Greys in action…

Previous: Village at the End of the World
Next: Monday Face/Off – Christopher Walken 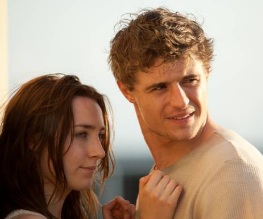