The setting is rural 1980s America. Jim Schmidt (Barr) has recently married Martha and moved back to his homestead, the isolated farm named ‘Our Blessing’. Jim originates from an extremist religious community called the “Hittites” (think ultra hardcore Amish if that helps) but his union with an ‘outside’ means he is disowned and shunned as per the orders of his own father, who happens to be the leader of this particular sect, Isaiah (Borgnine). As is the due of all sinners, Jim meets an untimely end at the hands of his own devilish machinery (his tractor runs him over) leaving behind a pregnant Martha with only the highly peculiar neighbor, Louisa Stohler (Nettleton), and her slightly stranger daughter, Faith (Hartman), for company. Luckily, her best friends, Lana Marcus (Stone) and Vicky Anderson (Buckner), come to the rescue, visiting her just as a black gloved killer launches into a murder spree.

If you’ve seen any of the promotional material for Deadly Blessing, you’d probably assume that the movie is based on a bit of cult-like insanity. Taglines promise a “gruesome secret, protected for generations” that will make us “pray you’re not blessed” while posters give the idea that there will be a sort of possession in the works. Prepare to be disappointed. Yes, the religious overtones are there but only so far as they set up the Hittites as a bunch of righteous kooks who take themselves a bit too too seriously. Nothing about their way of life or their form of worship is even remotely frighting; the punishments are a tad on the harsh side, especially by today’s politically correct standards, but nothing so severe that they’ll leave you shaking in your boots. You keep hoping they’ll turn out to be a great diabolical evil, but instead they remain a harmless bunch of crackpots you’d simply cross the street to be rid of. The further you get into the story the less things make sense, bringing us to an ending that is so ridiculously confusing it will top any WTF?! moments list. Twist endings are part and parcel of horror flicks but the one in Deadly Blessing does nothing useful, leaving a pile of questions unanswered and plenty of plot holes gaping back at you. 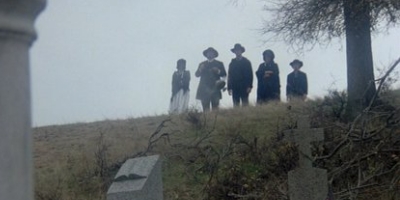 This is quite a shame, because even here Craven proves why he is one of the best. Deadly Blessing is of a much milder variety than we are probably used to from him: the scares are few and far between and are rarely ever followed by any proper gore. But that doesn’t mean it doesn’t draw you in, building a tension and creating an ambiance where all you expect is a new terror at every turn. Deadly Blessing could have been an excellent addition to his slasher film successes but the choice to go with creepy rather than all out jump-in-your-seat scares lets it down more than the incomprehensibly story.

Performance wise, there is nothing to fault. For all her feathery looks, Maren Jensen really does set her character up as heroine. There are moments of vulnerability but hardly any simpering or whimper in a corner. Martha is written as a strong character, obstinate against being driven out of her home and tough enough to survive what is to come. Frankly the best part of the whole mess is the the final battle, which is an all-out brawl between women, with not a single burly dude running in to save anything at the nick of time. 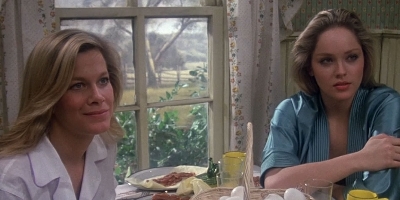 Originally released in 1981, Deadly Blessing works as an insight into how far Wes Craven has come. There are, at the most, three really good scares (two you’ll see coming and one that’s a real humdinger), a whole lot of creepy crawlies and a phenomenal WTF?! moment to look forward to. We’ve recently watched the horror genre suffer a slow and demeaning death at the hands of the remake. Deadly Blessing may not be the best of the lost but at least it comes from a time when Hollywood actually worked to be original.