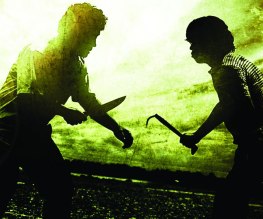 It is part of my particular brand of elitism to often assess the quality of movies I’ve not yet seen by being judgemental about the imdb plot summary. In the case of films that have not been widely released to the English-speaking world I obviously lessen my judgement, but not necessarily my amusement. The spectacular plot summary for Desire to Kill (or Enemy at the Dead End) reads: “A post-traumatic stress disorder patient bounded to his bed, finds himself sharing his room with a gang looking paralyzed amnesia patient. And he must kill him off before he is recognized.” Standard.

The poor dude who’s bounded to his bed is the suicidal Min-ho (Chun Ho-jin). He’s been throwing himself off cliffs and down stairs for days and the hospital staff are well frustrated. He’s joined in his room by the unconscious, bandaged Sang-up (Yoo Hae-jin), whose frowny aspect and knuckle tattoos make him most gang looking indeed. Almost immediately Min-ho starts trying to kill his new companion, a task made more complicated by the fact that he can barely move the left side of his body. The question of why he’s so keen on Sang-up shuffling off to the other side is something we learn slowly, as Sang-up (who you’ll remember is an amnesiac) begins to recover his memories. As he does so, he begins to wish Min-ho dead as well and a battle of wits and improvised arm enhancers is begun. 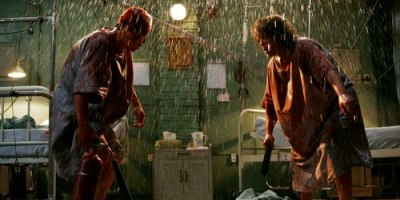 If you want more mystery than that, you’ve got it, buster. The two men have both been put on the same experimental drug (apparently whether or not to use non-approved medication is up to individual hospitals in South Korea) which is known to have side effects that include hallucinations. Why have they been put on such a risky drug? Is that really the desired dosage? Do they actually remember each other from a distant past that left them mortal enemies or is it just a hallucination? WHO CAN SAY?

Despite the director’s insistence that Desire to Kill is a comedy (IMDb doesn’t buy it), this is a thriller – albeit one without many thrills. There’s no real feeling of suspense; in fact the predominate emotion is gentle curiosity about if and how one of them will succeed in killing the other. We’re not even that concerned with what’s actually going on, and that I think is the film’s major flaw. Any decent mystery should have you scrabbling for clues along with its characters, and when you get the reveal there should be a moment of “I never would have got that, but I should have.” That doesn’t happen here. 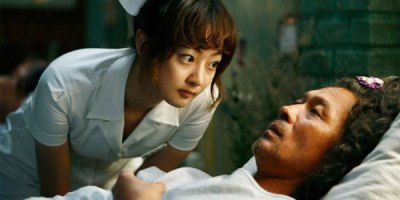 That said, there’s only so much you can do to damage a truly interesting concept. If Desire to Kill was remade by the chaps in Hollywood I can see it being a genuinely solid Hitchcockian thriller or maybe a black and absurd comedy. There’s something about watching two guys who can barely move brutally beat each other up in a hospital room while the entire staff watches a baseball game and the inconclusive memories that drive them to desperation are interesting to explore. There is a lot to enjoy here, and while the choppy scenes, unlikely science, and somewhat simplistic characterisations do at times grate, the strength of the idea and the well handled revelations throughout give the story a firm foundation to stand on. While it’s not as compelling of though provoking as it so wants to be, it’s an interesting and entertaining watch.