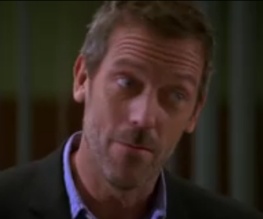 When we last left TV’s favourite unhinged bastard doctor, he’d been indirectly responsible for the death of his only friend Wilson’s (Robert Sean Leonard) girlfriend. It’s the one thing his up till now extremely patient colleague might not be able to forgive. Less excitingly, new-school team member Thirteen (Olivia Wilde) learned she had Huntington’s Disease. This season’s opener promises a little change, if not a permanent, show-altering one, with Wilson’s resignation from Princeton-Plainsboro and his friendship with House looking to be all but over. Somehow, though, considering Wilson’s forgiven House for all but killing several hundred patients in seasons past, as well as being a general pain in the arse, it’s a little hard to believe things between the two will change for good.

Season five pretty much sees the show continue its original formula unchanged: patient comes in with medical mystery, looms close to death while House tries increasingly crazy theories to save him/her, until around the 40-minute mark where the good doctor proves all the naysayers wrong, avoids a lawsuit once again and solves the mystery. Still, as the saying goes, if it ain’t broke, don’t fix it. With a strong supporting cast and the brilliant Hugh Laurie – who we’ve been a sucker for since his Blackadder days – we can’t see a need for rewiring any time soon. Plus, the acidic one-liners are toned ever so slightly down this season, making way for further explorations of the serious side of House’s character and giving Laurie a deservedly longer rein. The season finale sees the culmination of these explorations and may actually leave us with a genuinely different show next season. But then, is there any tricky situation House can’t get out of with a cutting quip?