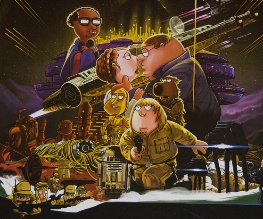 When it comes to inappropriate but tear-inducing laughs, Family Guy is about as reliable as they come, and even more so the DVD specials. They’re the sort of thing you won’t go rushing out to HMV to buy on the first day they’re released, but more wander down to Blockbuster to rent one rainy morning after a particularly heavy night before, ready to settle in with some Pizza Hut and helplessly chuckle the day away.

Luckily, despite running for a good eight years now, Family Guy has not yet reached that latter-series Simpsons stage of being so weird it’s no longer funny – perhaps because it was pretty damn bizarre to begin with. The pop culture references are still spot-on, the verging-on-bad-taste jokes still induce just the right mix of groaning and involuntary laughter – put simply, it’s effortless afternoon entertainment for twentysomethings. Especially when you combine the brilliance of Family Guy with a cultural icon Gen X’s and Y’s are all too familiar with: Star Wars. Having already set the precedent for Jedi-themed tributes/piss-takes with Family Guy: Blue Harvest in 2007, Seth McFarlane and his slightly sick in the head team of writers are back for another round with Something, Something, Something, Dark Side.

The story takes shape similarly to the first Star Wars tribute episode (incidentally, it also has the same director, Dominic Polcino, obviously the biggest Jedi nerd on the Family Guy team) – a power outage in the Griffin home forces Peter to rely on his storytelling abilities to entertain the family in place of TV. Once again, he relies on Star Wars rather than imagination and retells The Empire Strikes Back, albeit with a few McFarlane-esque twists – the best being when Yoda teaches Chris, aka Luke Skywalker, the ways of the force through watching DVDs with bonus materials, and when Han Solo, played by Peter, is tortured by Stewie’s Darth Vader by being made to listen to Paula Cole’s Where Have All the Cowboys Gone? on repeat. It’s typical zany Griffin madness, with a healthy injection of Star Wars geekism too – McFarlane and co have faithfully reproduced dialogue, music and animation techniques from the original film to a level that’s a cut above your average parody.

The more devoted Lucas fans will get the most out of this particular special, but we’re all familiar enough with the story to appreciate a good chunk of the in-jokes. Either way, it’s a worthwhile Sunday afternoon pick-me-up, with just as many laughs as we’d hoped. Seth, you’ve still got it.

Audio commentary by Seth McFarlane
Family Guy Fact-Ups
The Dark Side of Poster Art
Animatic version of episode
Family Guy Episode VI: “We Have A Bad Feeling About This” Sneak Peek 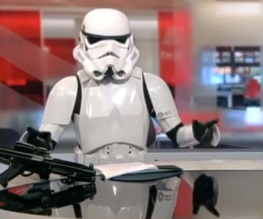