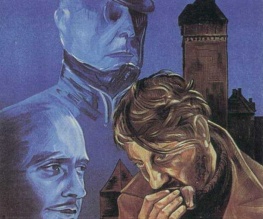 Films are banned for a number of reasons. Cannibal Holocaust was banned for having actual animal death in it. Pink Flamingos was banned for exploitation, sexual violence, incest, adult themes and animal cruelty. Madonna’s directorial debut, Filth and Wisdom, was essentially banned from being a film for being too shit. But La Grande Illusion, declared ‘Cinematographic Enemy Number One’ by Goebbels, was banned in several countries for being too nice. Y’see, its portrayal of prisoners-of-war getting along famously with their captors makes a stronger argument for Not War than a thousand shots of someone running around a beach in Normandy with their arm blown off.

Directed by Jean ‘son of the other one’ Renoir in 1937, La Grande Illusion follows three French officers – moustachio’d aristocrat Captain de Boeldieu, rascally rabbit Maréchal and kindly banker Rosenthal – as they have a surprisingly nice time of being imprisoned at the hands of the Germans. After being transferred just before trying to escape, they end up in the castle of wounded German also-aristocrat Captain Von Rauffenstein. The two captains, united by their social standing, soon develop a close bond. But when, compelled by their duty to France, our three heroes attempt to escape, WHAT IS GOING TO HAPPEN TO ALL THIS LOVELY FRIENDSHIP?

Watching La Grande Illusion in the 21st century is an unusual experience. At first, you’d be hard-pressed to work out what makes this particular oldie so enduring and significant, other than the genuinely gut-busting humour; between them, ‘Strictly forbidden!’ guy, Captain de Boeldieu arsing about with a flute and eight prisoners in drag singing the Marseillaise provide more laughs than Lee Evans’ entire stand-up career. The cinematography is gorgeous, the direction pretty exceptional, and the performances are all note-perfect. But.. until about halfway through, what we’re essentially watching is some cheeky Frenchmen arsing about in a PoW camp. Great for larks, but for biting social commentary? Absolutely. First of all, check out that release date: 1937. You don’t have to have a degree in Modern European history (which I actually do, but whatever) to know that this was not an especially stellar year for German-Franco relations, and even less so for inter-racial getting-along. But at a time when each side saw the other as being comprised entirely of feral, maniacal baby-killers, La Grande Illusion dared to put everyone on an even plain. The prison guards are just regular men doing a job, and they recognize that their prisoners are the same. Jewish banker Rosenthal, though as flawed as the rest of the characters, is probably the most positive character here, openly sharing the food parcels he gets sent from home at a time when stuff like this adorned German walls. We even get a French fugitive and a German milkmaid engaging in some serious international co-operation, if you catch our drift. Race and religion are irrelevant here, and the only real prejudice exercised here – class – is acknowledged as arcane and moribund. On hearing that French troops have been arrested after crashing behind German lines, Von Rauffenstein orders that any captured officers be invited to lunch with him. In many ways, he is just as trapped as they are; held in the castle, ordered to imprison men whom he’d normally call friends – he and Boeldieu actually have mutual acquaintances – all in the name of a war in which his interests are purely patriotic. And this is the crux of the point, the ‘Great Illusion’ of the title; far from a necessary evil, war gets in the way of some real progress, pitching man against man when together, they could actually get some shit DONE.

So, why the re-release now? Surely we’re past all that? As relevant social commentator Mel Gibson pointed out, the Jews are running Hollywood now, and inter-racial is now a full-on *ahem* film genre. But over the last decade we’ve seen first racial, then religious, and, this past year, class tension reach levels in this country that we thought we’d done away with in the 80’s. And war movies are STILL Us vs. Them, borderline jingoist chest beaters, just brave heroes overcoming faceless evil. It may seem like an obvious message, but La Grande Illusion‘s klaxon still needs to be heard: we’re all just PEOPLE, bro.

Previous: Afterschool
Next: Liam Neeson lined up to join The Butler