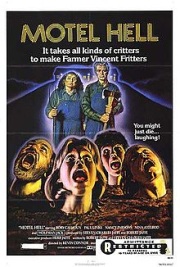 It’s far too often that a film like this completely underwhelms by being boring, or worse, alienates a wider audience by being too gratuitous. Motel Hell is in complete contrast to this depressing convention. There isn’t a mean bone in its body. Though there is blood, it is surprisingly lacking in gore, eschewing the genre prototype and showing the aftermath instead of the act itself. It balances the violence with the laughs, zig-zagging the line between nasty and nonsense. Though not quite up there with similarly-toned Return of the Living Dead, it punches above its weight and holds its own.

Let’s get it out of the way; the film is very dated and is rife with shoddy acting and tenuous plot. But that isn’t the point of a film like Motel Hell. It solely exists to entertain the butts in the seats, logic be damned. Some people might find this ageing (or decaying, if you like) B-movie too intimidating and walk away from it, but if you like the gonzo insanity of Texas Chainsaw Massacre 2, the wink-wink-nudge-nudge of Piranha, or the campy slasher antics of Friday The 13th, then this is your kind of film. Once you get past the first tepid 20 minutes, you will be in for the whole ride.

Rory Calhoun, who your grampappy will remember from them old Westerns, stars as hotelier/psychotic cannibal Vincent, but I’ll be damned if you aren’t rooting for him the entire time and, shucks, you are just happy to see him enjoying what he is doing, even if that’s butchering his guests (how does the motel actually turn a profit?). Even his sister, Ida (played by Nancy Parsons), who starts out in decidedly slimy form, becomes ridiculously endearing, even when offing the clientele (seriously, would no one notice the hotel’s guests check in but don’t check out?). 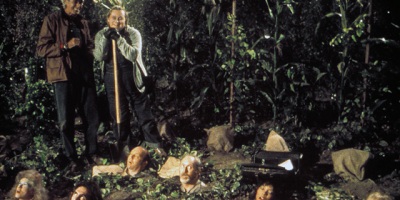 There is plenty of cheese to be had in Vincent and Ida’s police brother (hammed up by a wooden Paul Linke), some odd set pieces involving hypnotic wheels, and Cliff from Cheers playing drums in a band, but there are plenty of horrific visual gags – particularly Vincent’s secret garden, where he plants his soon-to-be-smoked-meat victims up to their necks by the cabbages. Glorious in its ridiculousness, with visceral satisfaction thrown in when we see the ‘vegetation’ have their vocal cords cut to prevent any screaming. Also, the last act to this one is a doozy, but I don’t want to spoil it for anyone. Let’s just say the poster art doesn’t lie…

Arrow Video has released this on Blu-Ray for the first time anywhere in the world, with extras including an informative commentary with the director and several interesting featurettes. Old films like this never transfer incredibly, but Motel Hell probably didn’t even look this good on its original theatrical run. Arrow maintain their reputation with another successful restoration. 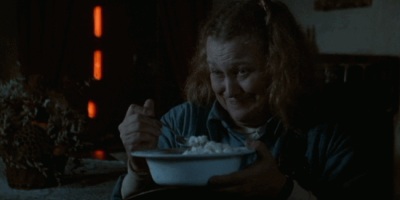 Don’t look here for a classic or a perfect film. You won’t find it. But the genre-loving and enthusiasm to be over the top is what makes Motel Hell stand out against its contemporaries. It’s not going to be the go-to choice for retro slasher film (the regulars of Friday The 13th and A Nightmare on Elm Street should still occupy these spots), but it happily earns its place in the pile.