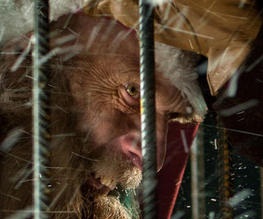 The buzz surrounding Rare Exports: A Christmas Tale has been exciting, with director Jalmari Helander’s first feature providing an entirely new take on the story of Santa Claus, introducing horror and suspense to the Christmas period. Based on Helander’s two youtube shorts, Rare Exports inc. and The Official Rare Exports Inc. Safety Instructions 2005, this feature length prequel provides some background to the shorts, and attempts to insert a fuller plot into their established mythology. The original videos are absolute must-sees, for their inventive and in-depth visuals, and the superbly dark humour which runs through them (see them below). The story concerns a community of reindeer hunters whose town is disrupted by drilling operations on a nearby mountain, which unleash a race of feral Santas into the countryside. Young Pietari is the only child in town to believe in Santa, and when the others begin to go missing, it becomes clear that the jolly fat man isn’t so jolly after all.

Rare Exports is fantastic visually, with the mountain towering over the village like a malevolent sentinel, the snow covered settings and lonely christmas lights depicting a mournful and eerie atmosphere, backed up by an excellent score. The overriding tone of menace is helped along by the isolation of the community, cut off from the outside world by geography. We are quickly aware that this is a world where men are men, relying on their wits and craftsmanship to get by in the harsh climate. There are even echoes of John Carpenter’s The Thing in the exclusively male cast and a sequence in an abandoned dig site, and it is obvious that the director is aware of what makes a great horror film.

The actors do an excellent job, although this is usually difficult to gauge in a mostly foreign-language film the all-male cast do get across all the right emotions through facial and body language, and the delivery of some of the lighter comedic moments is not lost in subtitles. One particular scene which stood out was an exchange between Pietari and his father, which conveys powerfully the rift between them, driven by a sense of loss through the absent mother figure. The real-life father and son barely speak to one another, and this is a well-judged moment between the two.

It is hard to dislike Rare Exports, being as slick and polished as it is, but there are unfortunately flaws to be found here. One of the central themes of manhood and growing up is a little heavy-handed, feeling a little unsubtle and sticking out like a sore thumb in amongst the humour and darker moments. Perhaps the worst and most fatal flaw of the film, though, is its pacing. For a film as short as this, it takes an age to get going- it is the best part of an hour until we see any real action. There is nothing wrong with building an atmosphere, but unfortunately Helander seems to have chosen to spend far too long on this part of the film, and as a result the audience may find themselves growing a little bored with the first three quarters. The final quarter is superb, with action, great special effects (The villanous elves are a triumph of make-up work) and a brilliant ending which is a nod to the earlier short films. Sadly though, the film struggles to get over the slow first hour, and does suffer as a result.

Overall, If you are looking for a bizarre alternative to the usual Christmas fare, Rare Exports is definitely worth a look, appealing to those with a dark sense of humour and a love for horror films. Director Helander is a talent to look out for, displaying excellent skills in handling the more frightening sequences, and able to combine comedy and horror elements to make a well-made film. Sadly, though, the pacing issues do somewhat ruin the film as a spectacle, and have maybe cost a star or so off the final score.

Previous: Mark Wahlberg to star in The Raven?
Next: Enemies of the People