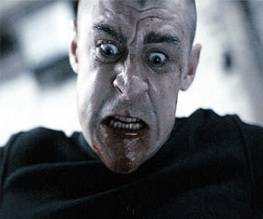 Savage is a rare, piercing account of a real-world dystopia of violent crime and victimisation, exposed through one man’s attempt to survive the after-effects of a brutal attack. It is jarring, extreme and as cruel as its title suggests, with the promise of retribution its only relief. But the story doesn’t follow the expected crime-and-punishment conventions, and consequently, Savage cannot be expectedly reduced to the blurred line between victim and aggressor.

The film follows Paul Graynor (Healy), an alienated press photographer, whose experience as mere observer of the decay and degeneracy of an inner-city Dublin is instantaneously reversed into participation when he becomes the victim of an unprovoked attack. Tortured by emasculation and isolated by the inability of those around him, Graynor rapidly spirals into a disassociative descent. The assault eclipses his former existence and from that moment on, his identity abstracts into little more – but nothing less frightening – than a series of primitive, instinctive responses to the event itself: fear, control, anger and revenge.

Savage tackles a necessary aspect of modern existence – overcoming victimisation – in a way often exchanged by similiar narratives for a more resolute conclusion. While Graynor treads the familiar path of attempting to reclaim a sense of mastery over the attack, his reclamation goes beyond retribution, into something much darker and much less determinable. His rapid transformation is not one of victim-turned-vigilante, but of the savaged into the savage. It is an uncomfortable, if not excruciating, experience and Healy’s portrayal of a broken, desperate man is utterly and painfully absorbing. His performance evokes a disturbing tension between empathy and revulsion -the drama is not a clear-cut one – and Healy superbly delivers this integral ambivalence with a nihilistic acuity. Savage is an exercise in ruthlessness: at no point are we permitted escape from Graynor’s trauma, and even his environs are submitted to brutality. Through his distorted lens we are made privy to a grimy, urban terror of perpetual danger, and his own monsterfication is amplified by visions engulfed in threatening chiascuro. The film is as much a visual torment as it is a cerebral one, a startling example of veracity and potency, the likes of which perhaps tempered only by a tentative script that makes way for a stronger, unspoken means of communication. As director Muldowney’s first feature, Savage bears little resemblance to what one would expect from a debut; unlike the over-ambitious, untethered verbosity that usually characterises directorial first attempts, it is polished, informed, and its conceptual open-endedness imparts a self-assuredness in the strength of its story. In totality, Muldowney’s is a sharp, sincere work of disillusioned clarity. It is not a drama contrived around a moralistic caveat; but simply the vividly raw, honest encounter with a violated psyche that can find no resolution. It is this ‘simplicity’ that makes the film all the more truthful, and all the more terrifying. The result is a starkly evocative, surreal realism and an affecting, visceral message that requires no interpretation.

Previous: Your Highness
Next: Matt Reeves linked with They Live remake