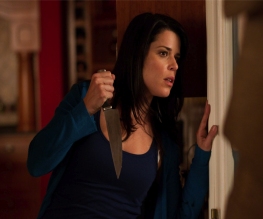 When Sidney Prescott (Neve Campbell) returns to Woodsboro for the final stop on the publicity tour for her new book, Out of Darkness, she is soon on the phone to her old foe Ghostface like nothing’s changed. As she rejoins forces with Sheriff Dewey Riley (David Arquette) and retired journalist Gale Weathers (Courteney Cox), and vows to protect her younger cousin Jill (Emma Roberts) from harms way, a new generation of highschoolers line up to be terrorised by the masked killer according to an updated set of rules. With the past decade’s obsession with torture porn, J-Horror and found-footage ripe for both homage and parody, the townsfolk on Ghostface’s rebooted death-list have their work cut out for them if they are to survive this delayed fourquel.

Whether you were waiting excitedly for this franchise’s return or not, there is something comforting about having a token from the past back in cinemas for more of the same. Undoubtedly the most original slasher film Hollywood has produced in the last eleven years, Scream joins franchises such as Die Hard and Indiana Jones in the fight for creative survival in a landscape awash with reboots, remakes and reimaginings. That was always going to be returning director Wes Craven’s biggest challenge, tempering the 90s nostalgia with a contemporary validity that saves this potential DVD-flogging cash-cow from sheer redundancy. While there are undoubtedly those who will disagree, I am relieved to inform you that he has managed just that: Scre4m beautifully lampoons the current state of the horror genre while delivering tenfold on a core relationship and premise that slip back on like your favourite rubber mask. While no scarier than any previous instalment of the series to date – Ghostface still smarting somewhat of his Scary Movie days – Scre4m is packed full of satisfyingly jumpy moments, building to a unexpectedly tense and thrilling finale. Although it may come as a surprise just how much you’ve come to warm to the film’s protagonists – I for one never thought I’d be willing Hayden Panettiere to live – it is relieving to discover that the franchise is still as irreverently funny as you’ve come to expect, even four films on. Kevin Williamson’s script is brimming with pop-culture references and self-awareness, lambasting and honouring everything from Saw to Final Destination (not to mention its previous instalments) with accomplished verve and success. Reflecting the veneration with which the meta ‘Stab’ franchise is afforded in the film, Scre4m – like its predecessors – will only truly flourish with repeated viewings, once it has been fully assimilated into pop-culture where it belongs.

If there is one problem with Scre4m it is that it’s too witty, too satirical, too long. At 111 minutes, the movie begins to feel inexorably episodic, with the narrative threads stopping and starting to distracting effect with every false-start and dramatic twist, particularly in the less streamlined second act where everyone presents themselves as a suspect. Scre4m is practically bursting with parody, genre inversions and assorted characters (the less said about Marley Shelton’s heightened Deputy the better), often proving too much to take in at once. It might have benefited Craven to play a longer game, with this film burning through material at such a fierce pace that some ideas and plot threads are perhaps done a disservice in the brevity with which they are handled. With a new trilogy touted, there would have been enough material here to stand the sequels in good stead had Craven not decided to play his all his cards at once – though it is impossible to know what the horror master might still have up his sleeve.

It really does come down to criticising the movie for being too Scream-like, however, with the return to relatively restrained knife attacks proving inevitably small-fry after Jigsaw’s intricate traps and Platinum Dunes’ gorification of classic horror. If, like me, you’re ready for a return to simpler times (and if, like me, the shocker of an ending catches you completely by surprise), Scre4m has one important advantage over the noughties’ apparently singular mission to shock and appall: characters that you genuinely care about. That they are so characteristically quotable and welcomingly compelling is only a bonus.

Previous: Sleeping Beauty trailer is rather surprising
Next: Arthur