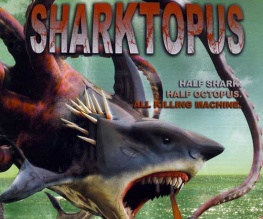 To divine the origin of Sharktopus, it may be necessary to go all the way back to 2009 and the SyFy Channel’s previous made-for-TV hit Mega Shark vs. Giant Octopus. Although I know it’s a painful thought process, we must assume that some (mercifully nameless) gonk at SyFy HQ thought “I bet we could do a similar film for half the SFX budget if we just mashed the two creatures together…”. In that monstrous moment of thriftiness, cunning and white-hot talentlessness was born SHARKTOPUS.

Right, I’ll try to do this in words of one syllable – chances are, if you genuinely want to see Sharktopus for its artistic merit you’re not really down with having to actually think. This is a film about a shark/octopus hybrid which kills many people before being killed in its turn; such is the nature of things. Before it is killed there is much blood and many ladies with nearly (but not quite) exposed breasts; there is also a man with a gun, who is not very good at killing sharktopi. The man who made the sharktopus gets angry and drunk while his clever scientist daughter helps the man with the gun to catch the sharktopus. In the end a clever trick they had forgotten about lets them blow up the sharktopus’ head. Everyone is happy, except for the people who are the dead people. </simple english> There doesn’t seem to be much point in criticising Sharktopus for its paint-by-numbers direction, shoddy script, talentless actors or mediocre CGI, so I won’t – all these things are par for the course if you’re into monster movies with the highest production values Windows Movie Maker can provide. Instead, I’d like to raise a few questions about Sharktopus’ anatomy. Here they are – SyFy channel, you can respond to [email protected]

1) Given that a shark is propelled through the water by its tail and an octopus uses a siphon beneath its head, how exactly is Sharktopus getting about?
2) Re: question 1 – do take note that sharks can’t ever stop swimming since they rely on forward movement to force water into their gills so they can breathe. How’s that working for Sharktopus?
3) Since Sharktopus clearly has gills and no other visible means of breathing, how does it spend progressively greater amounts of time out of the water?
4) Incidentally, you can’t possibly think its bulk could be supported by its tentacles on dry land, could you?
5) Further to question 4, even if Sharktopus could a) support itself on its tentacles and b) not immediately asphyxiate out of the water, some genius appears to have fitted MASSIVE SPIKES to the ends of each tentacle. Have you never walked on a beach in stilettos, SyFy Channel? This simply would not work. Discuss.
6) Sharktopus growls and hoots throughout the film. Sharks don’t make any noise at all. You know how they’re often referred to as ‘silent killers’? That.
7) You’re all fucking idiots, aren’t you? (This one is rhetorical).

Previous: Short Film of the Week – God of Love
Next: Wahlberg ready for The Fighter 2? 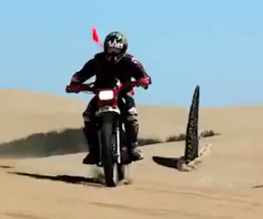 The 10 Worst CGI Moments Ever