Sinbad and the Minotaur 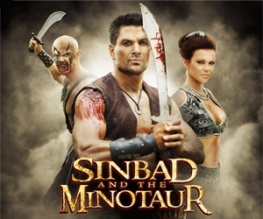 Monster movies are pretty much universally great, aren’t they? You really can’t lose – either they’re genuinely brilliant or so shit they’re hilarious – it’s very hard to make one which isn’t entertaining on some level. However, in a triumph for relentless human endeavour in the face of good sense and restraint, veteran Home and Away director Karl Zwicky has managed it with a film apparently devoid of a single redeeming feature. We hope, Karl, that your parents are very proud.

Classically minded BFF fans will recall that the Minotaur, a man with the head of a bull and a hunger for human flesh, was borne by the wife of King Minos of Crete after he refused to sacrifice a sacred bull and Poseidon consequently made it boff her. However, this fairly juicy tale evidently didn’t cut the mustard, so for the purposes of Sinbad and the Minotaur the titular monster is retconned as a massive spiky bull sent by Helios (different god) to curse Minos because he nicked the (solid gold) head of the Colossus of Rhodes. I don’t know either.

Anyway, fastforward a millennium and swashbuckling nitwit Sinbad (Bennett) is determined to learn the location of the head by stealing the fabled Chronicles of Minos from badass sorcerer Al-Jibar. Armed with the obligatory scimitar and flanked by – count them off! – a black guy ✓, a pedantic scholar ✓, a big ugly bloke with a club ✓ and a woman with her tits out ✓✓✓, Sinbad heads off to steal a priceless relic and get fake blood all over anyone who stands in his way. Even if he has to negotiate a labyrinth to do it. Hang on, what do you mean “there’s a monster in the labyrinth”? Pissing all over traditional tales isn’t necessarily a bad thing – the original Clash of the Titans played fairly fast and loose with Greek myth, but nobody complained because it was an intoxicating and eminently watchable fantasy. Sinbad and the Minotaur has no such get-out. The plot isn’t, the special effects barely top those in Sudden Fury, and the script is as lumpy as the vestigial horns which the Minotaur’s slaves grow every time they’re about to go mental – my personal favourite line, delivered just after the first encounter with the Minotaur, was the incomparable “I just can’t believe how big that beast was!”. Once upon a time, graduating from one of the classic Aussie soaps was the first step towards global stardom à la Heath or Kylie – if the woeful ‘stars’ of this dross are the best that Ramsay St and North Palm Beach can produce these days, their writers might as well schedule some cyclones.

Previous: Alien Vs Ninja
Next: The Top Movie Poster Trends