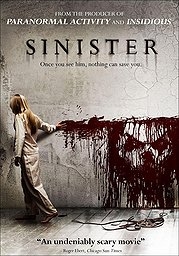 The plot of Sinister follows Ethan Hawke’s Ellison Osbourne, a once-successful true-crime writer, struggling to live off the success of his past. Times have grown hard, and he’s forced to move his family out of their mansion, to a somewhat smaller mansion (it only has one floor, see, so despite being MASSIVE, they’re still very clearly living in poverty…) What he doesn’t tell his wife and two young children (and well done Sinister for not having British actress Juliet Rylance attempt an accent – characters are allowed to just be British!) is that the house they’ve moved into is a former crime-scene; one he intends to become the subject of his latest book.

It’s not long before he discovers a concealed box of home-movies in the attic, depicting the previous tenants of the house enjoying a gay old time in their back garden… only for the tape to cut to the family strung up on a tree, and being slowly, horribly hanged. The rest of the tapes are of similarly disturbing family murders, and Ellison’s investigation into them begins to consume him, while the ramifications of his digging threaten to consume his family.

Sinister takes its cues from any number of sources – The Ring, Saw, Paranormal Activity – but strives to simultaneously distance itself from them; wanting to be something more. In that, it’s only partially successful. Ellison’s investigation eventually leads him to the supernatural, and a (fictional) Pagan god that ‘exists in its own images’ and has a penchant for snacking on children’s souls. The demon – called Bhaguul- is only glimpsed throughout the film, but he’s a genuinely unsettling presence. 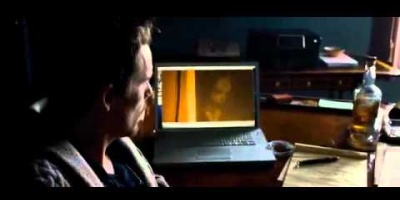 Usually, in horror films, less is more. In Sinister‘s case, the opposite rings true. Bhaguul is a great creation, but the film takes so long setting him and his mythology up that there’s not much time to actually to use him. It’s great that Bhaguul lurks on the edges of the film – much as the idea of him lurks on the edge of Ellison’s mind – but he’s so effective, and his MO so creepy, that the film could have spent more time utilising such an effective ghoul. It makes Sinister a curious entry into the genre where more might have been… well, more.

Boasting some slick, knowing direction from from Scott Derrickson (The Exorcism of Emily Rose), the plot takes place entirely in and around the Osbourne household. This creates a particularly claustrophobic atmosphere, with the creaky, shadow-ridden house becoming a terrifying presence of its own (Derrickson’s use of shadow is particularly effective). However, it might have been wiser to show that this sinister evil stalks Ellison throughout his whole life, rather than just at home. Limiting the setting to the one house is both effective and detrimental; suitably oppressive, but lacking in scope.

Ethan Hawke, as troubled writer Ellison, is terrific. The film spends a lot of time watching Ellison watching things, and Hawke sells the inexorable draw of the horrific murder footage brilliantly. As horrid as the events he’s witnessing are, he can’t tear himself away; can’t stop watching. His growing obsession with the tapes, coupled with his growing paranoia that something unnatural is occurring, are excellently conveyed, and this is as much a tale of obsession; of a writer neglecting his family (and mental well-being) in the pursuit of a story; as it is about the supernatural. As the disturbing nature of the case continues to unravel, so does Ellison’s frayed state of mind, and Hawke’s world-weary, increasingly panicked performance keeps the film grounded 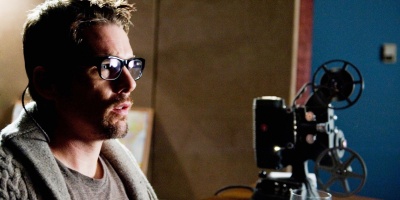 As for the tapes – on which so much of the film is concerned – they’re incredibly disturbing. While the Saw franchise featured more ingenious forms of murder and torture, those depicted here are so much more effective for seeming so real. Shot on grainy super-8 footage, the creative murders – a family bound and chained in a car are set alight; another bound to pool-loungers are dragged helplessly into the depths – are not so creative as to be unbelievable. Nobody buys that any of Jigsaw’s traps are real, but these? These could totally happen in your own home, and that’s a powerful thought. The disturbing footage, coupled with the supremely effective soundtrack make for a haunting and alarmingly real terror (as well as some effective, garden-variety jump-scares).

If Sinister falls down, it’s once again in its attempt to distance itself from other horrors. As the tension throughout the film builds and builds, and the true nature of the supernatural terror is slowly revealed, the ending of the film is at once brilliant and an anti-climax. It’s brilliant in that it’s so low-key; there’s no huge chase – no big climactic fight between good and evil – and instead the film stays true to itself and plays out to its (super)natural conclusion. It’s a creepy, understated and disturbing dénouement, and all the more evocative and powerful for it. 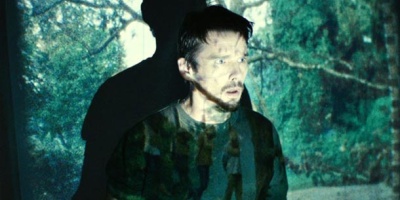 That said, with the gradual and relentless building of tension throughout, you can’t help but feel that Sinister is actually one-set piece short – there’s no release for that tension. The ending is brilliant, but to really sell it, the film did need a chase, or a big fight, or something, to lead up to it. As it is, as perfect as the ending is, it comes out of nowhere, and that leaves the film feeling frustratingly hollow. For a film that takes great pains to show its main character learning to edit film, Sinister feels like someone left out a reel.