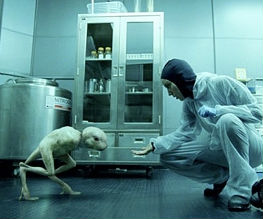 Clive and Elsa are a couple of romantically linked, cutting edge scientists experimenting with gene splicing for a pharmaceutical company, creating squishy looking phallic hybrid slug monsters for the benefit of mankind. When they illegally take it a step further by adding human DNA into the mix they create Dren, a sylph like humanoid with a sting in the tail whose existence begins to unravel their relationship, their careers and their morality.

The plot is very intentionally like something out of a B-movie, with even the main character’s names serving as nods to the actors in The Bride of Frankenstein. As such, the science and the logic behind Splice is beyond silly and the characters take themselves very seriously. While this provides a lot of paradoxically po-faced humour and fresh takes on old clichés, the B-movie feel doesn’t always sit well with the seriousness of the film. Splice expects us to consider the Freudian implications of parenting a hybrid, and then makes the creation of Dren is so far-fetched that it detracts from the film’s attempts at psychological depth. Apparently to create a hybrid you stick a load of DNA in a blender (we are never told what animals Clive and Elsa have used) and hope it sticks together – but god knows what you’ll get. While in the fifties it was acceptable to have such hazy scientific reasoning, a modern audience requires more than Splice‘s laughable explanation.

The parts of a hybrid

Dren herself however, is enough to make you forgive the film’s flaws. Her fascinating evolution is unlike any cinematic creature that has gone before her and she will surely be remembered in years to come as a classic move creature. Her journey from sprawling slug, to kangaroo-legged humanoid is both realistic and beautiful, supported by excellent special effects and a mesmerizing performance by Delphine Chanéac. Dren has been imbued with a seamless blend of animal and human characteristics, at once both innocent and utterly terrifying, with Chanéac never failing to convince as the ever-lovable, ever-threatening hybrid. Brody and Polley too, do well in the scientist roles, keeping their characters compelling even as they start to make increasingly bad decisions. Polley in particular shines as the damaged Elsa, who can’t help but let her own horrible childhood affect her treatment of Dren. While there are many hokey elements about the film, the evolution of Dren and the devolution of the scientists is what the film is really concerned with, and in this regard it surpasses similar genre movies that have gone before it.

It is sad then, that Splice descends into typical monster movie territory in the last ten minutes, negating some of the interesting questions that it raised previously. It is certainly a dark and disturbing film, with graphic sexual content which some will find alarming but for me it wasn’t nearly as alarming as it should be. Key points were blunted by the many unbelievable aspects of the film, that seem an inevitable part of Splice’s humourously awkward brief of splicing a B-movie with a relationship drama, with a thriller and with everything else bar the kitchen sink. However, much like Dren, there is something freakishly lovable about Splice. For those that are not fans of horror, B-movies, or feeling slightly alarmed, Splice won’t convert you. But if like me, you find at least some of the latter appealing, then Splice is ultimately a wonderfully original creature feature, that in a summer filled with remakes, reboots, and other hateful things beginning with,‘re,’ is a welcome change of pace.

Previous: Predators sequel already under way?
Next: Save the UK Film Council!