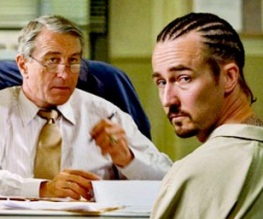 Robert De Niro is crabby parole officer Jack Mabry, trying to gently drift into retirement where he can spend his days drinking scotch on his porch next to unhappy wife Madylyn (Frances Conroy) His plans are shattered with the arrival of his last case, Stone (Norton), a corn-rowed arsonist who is reaching his eighth year in the slammer. Stone hatches a plan to get out of prison early, using his wife Lucetta (Jovovich) as bait.

After the ten minute introduction we’ve learnt that Mabry has his evil side, Stone can be something of a philosopher, and Lucetta is not as sweetly patient as she seems. Also, that Edward Norton looks really, really silly in cornrows. And then…well, not much happens. The film struggles to find a genre, dealing with the subjects it does. If it was a run-of-the-mill prison drama, we would expect suspenseful soundtrack, fast cuts and one obstacle after the other blocking Stone’s release. None of that applies here. Instead, there is much talk of religion, and the ethics of law and morality, which seems very much at odds with the scenes of seduction between Lucetta and Mabry.

The scenes are slow, but not slow enough to make the film arthouse which is quite clearly how it wants to be labelled. The story was written by Angus MacLachlan, who wrote Junebug, a southern drama that veered away from the mainstream. Director John Curran has worked with Edward Norton previously in A Painted Veil, a meditative piece containing long, beautiful shots of the Chinese countryside. Without the scope of such a backdrop, Curran’s mise-en-scène seems rather limited, and endless shots of Jack and Madylyn Mabry’s house, with its long driveway and isolated location are consequently over emphasized. Nevertheless, the dialogue is respectable, and treads the fine line between philosophizing and pretension without sliding into cliché. Casting is mostly excellent, with Frances Conroy a standout as the ghostlike Madylyn, beaten down by years of loneliness and neglect. The movie, one suspects, suffered from producer pressure, and so degenerates into a thriller at its end, presumably to fulfil generic prison genre expectations. Stone works best when it is a study of character rather than trying to be suspenseful, and the ending confirms our worst fears; an arthouse piece on morality, turned into a Hollywood prison drama.