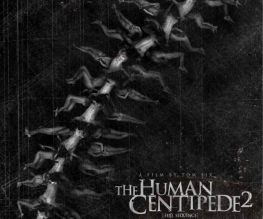 Shall we play a game? It’s called Let’s List Things I Am Happy For You to Do With Your Film: disgust me, shock me, make me feel ill, intrigue me, amuse me, drag me into a sick and twisted world of torment. What I am not happy for you to do is WASTE MY TIME WITH THIS HOUR AND A HALF OF RELENTLESS BOREDOM. You didn’t exactly put much effort into the story, did you? Mentally unwell mute Martin (Harvey) gets obsessed with the original Human Centipede (really, Tom? You actually thought it was that good?), so he starts kidnapping people in order to create a twelve-person arse-to-mouth conga line. Hilarity ensues. Oh, and it’s set it in a world where a single blow from a crowbar always knocks someone out, the police don’t exist (or at least don’t care about gunshots or conspicuous pools of blood) and it’s always raining for some reason.

Let’s start at the top, shall we Tom? The most basic problem with this waste of film. It’s called Habituation, and it’s a psychological process by which repeated or constant exposure to the same stimulus decreases the response, leaving you numb to it. What this means, in terms of The Human Centipede 2, is that the first 20 seconds of muffled screaming and wet ripping sounds are unpleasant. The five minutes after that they’re just really annoying. Beyond that, you honestly don’t notice. It’s why no horror movie worth its salt is genuinely ‘unrelenting’; if you don’t relent occasionally, it gets tedious. Next up, we have the actual direction. Why did you think black and white was the way to go? Oh, that’s right, because your special effects wouldn’t stand up to colour film. It’s harder to spot that you’ve just blacked out a few teeth if there’s only monochrome to deal with, and it makes it more arty, right? Wrong. Then there are the long repetitive scenes where Martin lines up all the whimpering victims, then goes down the line examining them all, then turns out the lights and examines them all with a torch. Obviously they’re meant to be excruciatingly meticulous, keeping the audience’s focus on the human misery as long as possible. Except, as we’ve already established, we’re bored of it before the scene even begins.

Next there’s the acting. Obviously, Tom, you didn’t have a lot to work with here: no-one who’s regularly playing the Dane at the Donmar is going to leap at the chance to be an integral part of a rimming chain, but I’ve seen more emotional depth in primary school nativity plays. They didn’t have much to work with, either, did they? I understand why you wanted an audio flashback to the protagonist getting sexually assaulted by his father. Sounds like it could be genuinely shocking. Unless, that is, you write a line as cripplingly stupid as “Stop your crying, your tears only make Daddy’s willy harder!” All told, maybe it’s for the best you kept Martin silent. And he is genuinely repulsive. But that’s not enough, is it Tom? Because after an hour of looking at nothing else, we’re as tired of his bug-eyed fat face as we are of the rest of this gunk-covered yawn-fest. By the way, good job on adding in a superfluous psychiatrist with an Alan Moore beard who wants to fuck him, because why the hell not, Tom Six, why the hell not?

Maybe it could be argued that this film would shock more successfully without the BBFC cuts, but actually seeing cock-on-sandpaper action, or barbed-wire rape, or even a new-born baby being killed wouldn’t have helped. You so fundamentally lack any sense of pacing, emotional depth or drama, that it’s actually conceivable that you’d have managed to make a sanding-wank boring.

There is literally no reason to see this film. It fails as a horror movie. It fails as extreme art. It fails as an exploration of obsession or pain. It even fails as mediocre torture porn. I’d call it a car crash, but car crashes are too exciting. It’s a car with transistor trouble gradually slowing to a stop, then having to wait twelve hours for the AA to come. Also the car is full of bad movie. I sincerely hope you’re called Tom Six because there are five other clones of you. Then you could form a centipede of your own, with you on the end, and maybe (just maybe) you could justify being so full of shit.

Previous: The British Guide to Showing Off
Next: Top 10 Films to See at Christmas 2011 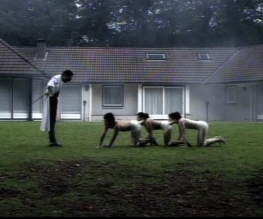