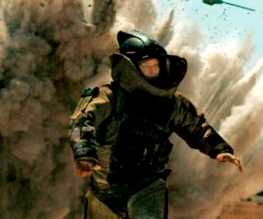 The Hurt Locker, Kathryn Bigelow’s thrilling and hard-hitting war drama, is a master class in sustained tension as a three-strong bomb disposal squad attached to the US Army risks life and severed limb to defuse roadside IEDs. The men of Bravo Company’s bomb disposal squad count down the 38 days left on their current rotation. Staff Sergeant William James is the new boy, joining down-the-line sergeant JT Sanborn and specialist Owen Eldridge on the streets of Baghdad. James’s gung-ho, fatalistic approach to his job quickly creates friction with his team mates in a situation where no-one is safe.

Expect to bite your nails to the cuticle over the subsequent two hours. Journalist and screenwriter Mark Boal spent time embedded with an army bomb squad in Iraq and his hellish experiences add the sheen of uncomfortable realism to Bigelow’s directorial brio. The odds are stacked against these men from the very first frame and the few who live to tell the tale will be emotionally scarred for the rest of their civilian lives. The antagonism continues on subsequent missions, like when James discards his military issue earpiece so he can think clearly without Sanborn barking in his ear. “Please put your headset back on,” instructs the sergeant. James responds by flipping the bird. “That’s a negative,” translate Eldridge.

When one reckless action has shocking and fatal consequences, Sanborn finally explodes – “We didn’t have to go looking for trouble to get your adrenaline fix!” – and James is compelled to face up to the repercussions of his decisions. The Hurt Locker is a gripping portrait of courage and carelessness under fire, anchored by strong performances from the leads as three very different faces of the modern US military. Renner captures the contradictions of his unit leader, who struts the line between bravado and suicidal stupidity. Mackie and Geraghty are compelling in their roles as the voices of experience and exuberance, and there are pivotal turns for Guy Pearce and Ralph Fiennes too as men caught in the relentless crossfire.

Bigelow’s direction is impeccable, shooting on location in Jordan in 130-degree heat to capture the exhaustion on the faces of her actors as they become embroiled in the meticulously orchestrated action sequences. Every bead of sweat, every grimace of pain looks and feels real, yet the men of Bravo Company wouldn’t want to be anywhere else. They get their kicks staring down the barrel of the enemy’s guns and dodging bullets every single day, and we’re invited along for the ride.

Behind the scenes featurette
Cast and crew interviews

Previous: James Franco up for lead in Danny Boyle’s 127 Hours
Next: Yes Man