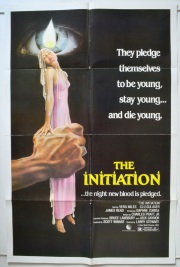 The Initiation (1984) has it all: gallons of red stuff, psychoanalysis, caricatures, a sanatorium, boobs, trowels, and frat boys in tiny shorts. Kicking off with protagonist Kelly Fairchild’s satisfyingly Freudian nightmare, the film segues into a candlelit meeting which marks the initiation of Kelly and three other young, nubile things into the Delta Ro Kai sorority. Their prank mission? To break into Fairchilds department store using daddy’s keys, strip the security guard down to his birthday suit and escape with the uniform in tow. A far cry from today’s puke-a-thons but, as it transpires, just as messy.

Fortunately, a floppy-haired assistant professor (James Read) comes to Kelly’s rescue with an assortment of brainwave-deciphering gadgets, a burning desire to help unravel the truth behind her burning nightmare, and a set of devastating cheekbones. But even good bone structure isn’t enough to tackle the horror awaiting the four sorority sisters at the department store. Which, as it happens, keeps you waiting: a pleasant thing about The Initiation is the fact that the real action takes a long time to get going, meaning that the film feels much longer than its 93 minutes – and not in a bad way. To eyes accustomed to rivers of blood gushing forth from halfway through the opening credits, a bit of a scenic plot route does no harm.

And what would a slasher cult classic be without more than its fair share of romantic corniness and racy lingerie? There’s a first kiss set to schmaltzy piano music and a sentimental-yet-juicy encounter on a shop mattress, not to mention enough lace négligées to have Hugh Hefner reaching for the inhaler.

There’s no escaping the fact that The Initiation in its entirety is an Average Joe but, if you can avoid getting seasick from the gratuitous dissolve transitions, the drunkenly leering shaky cam action is a nice touch. As is director Larry Stewart’s snappy first-person portrayal of the killings, which are just tacky enough to be cool. Likewise, the odd abysmal snippet of dialogue is so awful it’s almost good: “What was that?” – “Nothing. It’s just a bump in the night.” One’s intermittent cringe reflex is also under siege from the acting itself, which in general is mediocre at best; thankfully Daphne Zuniger, the human behind Kelly, is sufficiently easy on the eye for this not to be a deal-breaker.

Most frustratingly of all: whilst we can all appreciate a succinct ending where the details aren’t thrashed out into the minutiae, there are just a few too many loose ends in this one. Too many unanswered questions and seemingly abandoned subplots. Leave us wanting more, yes. Leave us knitting our brows and demanding from our viewing comrades to know if we nodded off for twenty minutes, no. That said, enjoying The Initiation is like making yourself a Marmite and Nutella sandwich. Wrong, improbable, but very much within the realms of possibility.