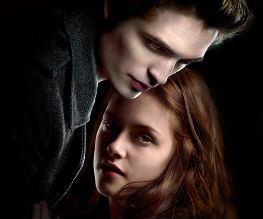 While the plot increasingly feels like a pop culture cliché – boy meets girl, girl falls in love with boy, boy turns out to be a vampire – the casting does inject some life into proceedings. While the role of Edward requires little other than for Robert Pattinson to smolder, there is no denying the excellent chemistry between him and co-star Kristen Stewart that makes the film so watchable. Stewart herself lends her indie cool to a role that could have easily been wooden in someone else’s hands. Above all, the central relationship manages to be heartfelt and earnest rather than saccharine which is refreshing in an age full of sugary-sweet High-School Musicals.

But the stars cannot save the film from uneven plotting, where all of the action seems to happen in the last twenty minutes. And while Stewart does a good job, she is still trapped by the demands of the role. Bella is supposedly an intelligent young woman, yet when Edward tells her how much she wants to drink her blood she can only reply, ‘I trust you.’ She ultimately just wants to be swept of her feet like the girl friends she is supposedly so different from. It is sad that the heroine so many young girls look up to aspires to be a blood bag to a 104 year old man with no discernible personality.

That said, an impossible romance is itself pretty impossible in today’s society where anything goes, and Twilight does well in using the supernatural angle to bring an old fashioned romance to modern day teens. That however, is where its appeal ends. Twilight is altogether too dull and too tame to have me queuing to see the next installment, but nor does it have me calling for Van Helsing – provided the Twi-hards do not squeal within a five mile radius of me.