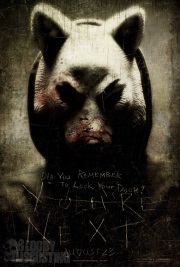 It doesn’t start brilliantly, but that’s kind of the point. For the first act, You’re Next sticks to genre staples and conventions; if reviews and trailers have prepared you for a wry horror comedy, you might follow the cold opening dispatch of a post-coital couple, complete with “eugh, really?” pointless nudity, with a “…ha?” It sets an odd precedent for the next twenty minutes, which combines, essentially, the opening act of Festen with bumps n’ jumps stuff, as a wealthy couple (Barbara Crampton and a curiously wooden Rob Moran) nervously investigate the noises coming from upstairs as they welcome their estranged brood for their anniversary celebrations. There are some gentle laughs and chills to be had here, but it all feels too familiar. And then someone gets a crossbow bolt to the face, and the fun begins.

You see, it was all a ruse. Director Adam Wingard and screenwriter Simon Barrett (who worked on V/H/S, The ABCs of Death and the sorely underrated A Horrible Way to Die) know that the best way to take down the genre is from within. Once the rules are established, You’re Next becomes playful. Scenes of chaos and carnage are punctuated by howls of “I’d move but there’s a FUCKING ARROW IN MY BACK.” A heroic run for help is viciously, hilariously cut short. Elements introduced in that opening scene are reintroduced as horror and comic devices; memorably, a CD player stuck on repeat is effective as both.

As our heroes and villains slot into more distinct roles, they also become more compelling. In particular, Joe Swanberg’s boorish asshole makes the transition from, essentially, the antagonist of the first act to an affably useless punishment sponge, with Hilarious Consequences. Best is relative newcomer Sharni Vinson, our outsider/heroine/token Aussie (not a thing). Her initial dismissal by the family is deliberately OTT (“that accent is SO annoying”), and her rapid ascension to efficient intruder-dispatcher ridicules the ludicrousness of the Last One Standing trope when we learn that she grew up on a SURVIVALIST CAMP. It’s a moment that’ll either completely lose you or fill your pants with delighted Laugh Piss, which will only increase as her improvised brutality becomes more inventive, and her withering patience with everyone’s bullshit whittles her eyebrow into a perfect arch. As a soon-to-be-offed points out “We didn’t expect you to be so good at killing people… which is kinda weird, by the way.”

You’re Next is far from a precise machine, and that works both for and against it. In a more tonally consistent film, you might not get a deadly serious set-piece as brilliantly executed as two people stalking each other in a basement illuminated by a camera’s automatic flash, or a slow, subtle reveal (in a bedroom) that feels like ice water poured directly into your chest. And the twist(s), as is so often the case with horror comedy, will either tickle you or irritate you depending on how willing you are to suspend disbelief.

But if there’s any genre where messiness is an underrated asset, it’s comic horror. Once important lode bearers like pace, structure and character are in place, tonal inconsistency and fuzzy logic are easily forgiven if you can keep the laugh and shriek levels up, particularly if you marry the two with some gleefully twisted yucks (sorry). It worked for The Evil Dead, it worked for An American Werewolf in London, it worked for Shaun of the Dead and it works for You’re Next. It’s a savvy, deft genre parody with real affection for its source material, and it brings more than enough ideas of its own to the table. It’s a dopey grin fest, and we’ve been sorely in need of one.

Previous: Top 10 memorable meals in film
Next: Fifty Shades of Grey finally gets its leads