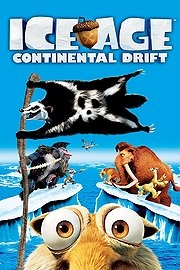 If we’ve learnt one thing in the ten years that the Ice Age franchise has been churning out increasingly terrible movies, it’s that Ice Sells. Ice Age: Continental Drift opened on Friday and has so far taken well over $300 million at the box office. Since it cost $100 million to make, basic numeracy will tell you that 20th Century Fox has already made enough money to add another three nonsensical, anachronistic, soulless films to its franchise. Ice Age: The Only Good One came out in 2002 and it was everything you could want from a children’s movie – jokes for grown ups, jokes for kids, danger, adventure, scary characters, loveable characters, scary-but-then-loveable characters, a moral and an amazing soundtrack (I bet you can still remember Rusted Root’s Send Me On My Way playing while the mammoth lumbers off with the baby). The Ice Age franchise then stripped all that away, leaving only the characters and the title, and milked this cash aurochs (that’s a prehistoric cow) for it was all worth over another three films. The actual title of this ice-based nonsense isn’t Ice Age 4, but Ice Age: Continental Drift. Removing the numbers achieves the dual purpose of making haggard parents forget how many essentially identical films they’ve sat through, and allowing the outrageously lucrative franchise to keep going indefinitely. Bear in mind that the target audience for the original Ice Age are now nearly 20; they’re probably in Ayia Napa right now, stressing about UCAS and where to do Photography with PE, they certainly don’t care that Manny and the gang are trapped on an ice floe.

The number of talented and/or famous people lending their voices to this tragic shell of a children’s film is staggering. There’s our original gang of course, Ray Romano, John Leguizamo and Denis Leary as Manny, Sid and Diego, but we’ve also got Queen Latifah, Seann William Scott, Jennifer Lopez, Peter Dinklage, Wanda Sykes, ‘Drake’ (apparently he’s someone hip), Nicki Minaj, Nick Frost, Simon Pegg and Patrick Stewart. What are you all doing?! Didn’t you read the script?! Didn’t you see that your characters made no sense, your words were hollow, your narrative arc pointless? Ice Age: Flogging The Dead Mammoth starts off with Scrat, that sabre-toothed squirrel that people seem to love, accidentally breaking some ice with his stupid nut and causing the break up of Pangaea. It would be tedious for all involved to start pointing out how chronologically inaccurate things are going to get, but you should know that Ice Age was set 20,000 years ago, a time when there really were mammoths, smilodons and humans, and they really would have been migrating. If Continental Drift is opening with the break up of Pangaea, we can set it to roughly 200 million years ago, and in one swift twist of an acorn any educational factor to the movie goes out the window. Not that it matters, Ice Age 3 had dinosaurs. Manny now has a teenage daughter, Peaches, who’s keen to hang out with the cool mammoths (you can tell they’re cool because they look like Bratz dolls). They have some halfhearted father-daughter angst and then the continents shift (or something, who cares?) and Manny, Sid, Diego end up on an ice raft drifting out to sea. They’re accompanied by Sid’s Alzheimer-riddled but feisty grandmother, Granny, voiced by Wanda Sykes, perhaps the only new character who’s even remotely likeable. The rest of the film is just a mash up of scenes from The Perfect Storm, Pirates of the Caribbean, Avatar, The Lord of the Rings and Mean Girls, sprinkled with tired old story staples about ‘sticking together’ and made colder, and with extinct animals that WEREN’T ALIVE AT THE SAME TIME.

Our main antagonist is Captain Gutt, a Gigantopithecus who captains the pirate ship that takes Manny and the Sub-Zero Heroes hostage. Voiced by Emmy Award winning Peter Dinklage (Game of Thrones), Gutt is a little disappointing as a villain and the whole get captured/escape/steal the pirate ship routine is painfully dull, made duller by Jenifer Lopez doing an impression of a sexy sabre-toothed pirate tiger. Even the set pieces and visual animation that made the other films bearable isn’t up to much.

It’s all just sub-plot anyway, the real story is Scrat, his nut and a treasure map. He eventually ends up in Scratlantis, where Ariscratle (Patrick Stewart) welcomes him to what you think might be heaven, and therefore the logical end to the Ice Age agony. It’s not. Scrat accidentally pulls a plug, Scratlantis sinks to the bottom of the ocean and Scrat inexplicably ends up in the Nevada desert. His eyes burn in the heat and he and the audience scream in pain as we realise there might be an Ice Age 5.