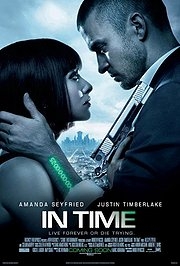 Imagine having the balls to go “D’you know that phrase ‘time is money’? I bet you I could wring an entire film out of it, simply by not understanding what a metaphor is”. You can’t, can you? Quite right, it’s an insane thing to do. However, Andrew Niccol is a man so dangerously out of control that he once let Nic Cage charge around with a plane full of guns; and in all honesty, his mad concept of a world where time is the only currency nearly translated into a cracking film. It just needed a few minute adjustments. Did you notice the contrived temporal pun in the last sentence, by the way? You’d better get used to those. Will Salas (Timberlake) is in a hurry. That’s nothing new, to him or anyone else in his scuzzy neighbourhood – you tend to get used to doing things against the clock when you’re constantly within a day of death. In Will’s world, humans are genetically engineered to stop ageing at 25 – however, on the day they stop ageing an inbuilt timer (conveniently located in their arm) starts counting down from one year to zero. From that moment on, life becomes a constant race against time as the poor earn, beg, borrow or steal enough time to make it through the day without ‘timing out‘. Will has survived three years since his clock started, and his mother (Olivia Wilde) has made it to fifty – each of them living one day at a time.

Imagine, then, how ticked off Will feels when he goes to a local bar and meets Henry (Matt Bomer), a rich traveller from luxurious New Greenwich – Henry is 105, and still has more than a century on the clock. After Will saves him from a gang of time-stealing Minutemen, Henry gives Will almost all of his remaining life, charging him to not waste his time. Will sets out to reach New Greenwich and find out if there’s a way to redistribute time and stop the rich living forever while the poor die at their gates; however, things become predictably complicated when he runs into Sylvia (Seyfried), the only heir of a time magnate with a million years in the bank. And all that’s before ruthless Timekeeper Raymond Leon (Murphy) gets involved – Will’s borrowed seconds are ticking away faster than he can count, except that he can count because THERE’S A CLOCK ON HIS ARM. Have you noticed that the film’s about time yet? Honestly, that barrage of piss-poor references to In Time‘s temporal theme is nothing on the actual experience of watching it. Every second or third line of dialogue contains the words ‘time’, ‘clock’ or ‘counting down’, and Will’s self-righteous refrain “You can do a lot in a day” is dragged out at least half a dozen times. It’s such a shame – In Time does have a really fantastic premise, and the first few minutes are so promising that it makes the film’s descent into incoherent and patchily moralising nonsense even more painful.

If the concept is worth a year of Will Salas’ time, the casting has to be good for a month. Justin Timberlake continues to demonstrate that he really is a decent actor, imbuing his performance with a twitchily nervous energy which, coming as it does from a character who’s always had to look after his seconds, feels perfectly realistic. Amanda Seyfried is competent if unadventurous as the rich girl who finds some perspective on the wrong side of the tracks, and Cillian Murphy’s ominous Timekeeper would have been brilliant if he hadn’t had the brunt of the shit puns. The leaden, lifeless script really is the worst culprit, although every aspect of the production feels clunky and poorly constructed on some level – the constant, unbearably lazy switching between generic Skid Row and generic Millionaires’ Row is just one sign of a film stitched together from stock images and out-of-copyright dialogue. I shan’t make the joke about wanting my ninety minutes back, but it’s a struggle. For all its faults, In Time isn’t totally worthless – I just wish it had been a tiny no-budget film which could have been remade into something brilliant and memorable. Borrowing from everything from Logan’s Run to Robin Hood, this could almost have been the next The Matrix – instead, it’s heading inexorably for underdeveloped sci-fi hell. What a waste of time.

Previous: Tucker and Dale vs. Evil
Next: Anonymous