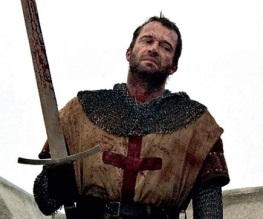 Ironclad is set in the year 1215, when King John (Giamatti) is hopping mad at being forced to sign the Magna Carta. Freedom of men? Common law? Codswallop! So, undoing all his good work he rampages around the country, chopping peoples’ hands and feet off and generally being quite contrary. Last on his to-destroy list is Rochester Castle, currently guarded by a dozen rebel warriors, including the naive Guy (Anaeurin Barnard), bloodlusty Beckett (Jason Flemying) and celibate Templar Knight, Marshall (James Purefoy) Can they hold the fort against the King’s thousand-strong army? Well, sort of.

In a Times interview, leading man James Purefoy said Ironclad was being pitched as The Magnificent Seven… in a castle. Why do filmmakers always pitch stuff as being like other stuff when we know its going to be nothing like it? Of course it’s completely different from The Magnificent Seven, but Ironclad had the potential to be a tense bit of cinema. The movie had amassed rather a large budget for an independent – over $20 million – which accounts for the good sets and costuming. Sadly, any semblance of a good film is demolished by the script, which is, to be frank, complete hooey.

The characters, who are largely one-dimensional, charge around the place saying predictable heroic/mercenary things, according to whether they are playing a goodie or a baddie. There are some stock scenes; jovial but seedy bar with wenches, bleak plains with armies appearing over the horizon, and the basic shots and edits do nothing to differentiate this film from the scores of other semi-historical epics.

A romance between Marshall, a Knight of the Templar who has taken a holy vow of chastity, and the married Isabel (Kate Mara) feels tacked on, and entirely unnecessary. One doubts they had the time to carry on a drawn-out, ‘we mustn’t touch each other – but we must’ relationship when under siege and existing on just horse meat and water. Paul Giamatti and Brian Cox (Albany) are particularly noteworthy in their valiant attempts to salvage some bad writing, and the performance level all round is actually not bad. Fight scenes satisfy with their gory authenticity, and the trope of David against Goliath always invites audience sympathy with the little guy. Despite all this, Ironclad remains resolutely mediocre. How many sub-par action films will happen before people realize that a smidge of dazzling sword play does not a good movie make?

Previous: RIP Jane Russell
Next: Tim Burton to make a film NOT with Johnny Depp