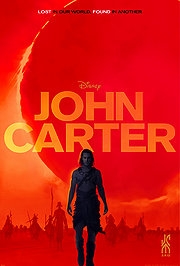 The benchmark for large-scale sci-fi films involving strange creatures on distant planets that initially seem different from us, but really are just like us, was set by Avatar back in 2009. Little do most people know that Edgar Burroughs’ John Carter novels were in fact the inspiration for much cinematic Sci-fi, including Star Wars. Nevertheless, John Carter has arrived in Hollywood relatively late, and, despite being an enjoyable stand-alone film, feels light-weight compared to the stalwarts of the genre. John Carter is a legendary Cavalryman in the American Civil War. Despite his heroic exploits, he’s out for himself and disinterested in committing to a side. After escaping Confederate captivity, he is chased to a remote cave, where he discovers not only a big vein of gold, but also a strange blue artefact that transports him to Mars (apparently breaming with life and civilisation in the 18th Century). The planet is divided between two warring kingdoms; Helium (goodies) and Zodanga (baddies), with the four-armed tribal folk, the Tharks, being neutral and relatively undisturbed in the conflict.

When Carter’s transported to Mars, he finds that he’s developed the ability to jump incredible distances, making him a desired weapon by both the Tharks and the Princess of Helium, Dejah Thoris (Lynn Collins), who literally falls into his arms after her aircraft gets besieged flying over Thark territory. Cue an epic personal and physical journey in which Carter is forced to decide between looking out for only himself, or those who he’s grown to care for. The plot, while seemingly simple, is full of strange sci-fi phenomena that are inconsistent or only half-explained; what exactly is that all-powerful blue stuff? What’s with the sun symbols? Why does a Thane appear on Earth near the start of the film? There is too much that goes unexplained for us to become fully immersed in this parallel reality, making the film feel like more of a light-hearted adventure than the sci-fi epic it attempts to be.

While the burgeoning romance between Carter and the beautiful Dejah Thoris is sweet to watch, Collins’ performance is a bit on the stiff side; a problem that’s not helped by her laboured British accent. Taylor Kitsch, meanwhile, appears to have one hell of a time leaping around as the roguish Carter, and his slow change from disinterested maverick to planetary hero is convincing. While we care little for any of the other human characters in the film, the Thark are an empathetic and visually impressive bunch. A sub-plot involving their leader, Tars Tarkas (Willem Dafoe with stilts and performance capture technology), desperate to prevent his daughter’s (Samantha Morton) execution infuses the strange creatures with a level of humanity – plus, they have an endearing 6-legged dog-like creature that comically runs around at light-speeds despite its fatty frame. The action set-pieces in the film are plentiful, though not always spectacular. Considering it’s depicting a conflict for control of a whole planet, the battles never quite seem epic enough. That being said, the arena battle against the giant white apes is pretty breathtaking. I’ve almost forgotten to mention the 3D effects of the film, but that’s because they’re pretty much non-existent. The only purpose in wearing your 3D glasses is so that you don’t have to suffer through the blurry haze of watching a 3D film in non-3D. There is not a single 3D effect here that will have you cowering behind your seat, and that’s a wasted opportunity for this kind of film.

Despite its 2-hour-plus running time, John Carter is a fast-paced film, to the point where it sometimes feels like we’re merely skimming through a story that has much more to it than we’ve been let in on. The film’s focus on set-pieces means that we get little back-story on anyone or anything in the film, making it hard for us to get absorbed in this potentially intriguing world created for us. Yet, while Carter doesn’t stand up to the sci-fi epics mentioned at the start of this review, it’s still an enjoyable fairy-tale adventure featuring enough action and human interest to keep your ass planted in your seat, if not exactly hanging off the edge of it.