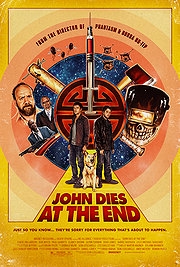 The latest film from Phantasm and Bubba Ho-Tep director Don Coscarelli, John Dies At The End has already amassed something of a cult following through screenings at film festivals such as Sundance, Glasgow’s FrightFest and, most recently, Dundee Contemporary Arts’ Dundead weekend. An adaptation of the comic horror novel of the same name by Jason Pargin, the film is currently without UK distribution.

While watching his friend John’s (Rob Mayes) band play one night, Dave (Chase Williamson) overhears a Jamaican drug dealer (Tai Bennett) declare to a group of party-goers that he has psychic powers after taking a newly available narcotic. When first John and then Dave find themselves dosed up on Soy Sauce, they too develop a number of strange abilities. Their powers come at a price, however, as the drug is proving lethal to some and making the survivors vulnerable to possession by an inter-dimensional entity called “Shitload”. In the future, Dave describes his experiences to Arnie Blondestone (Paul Giamatti), a reporter.

It goes without saying that that is only half of the story, however, as John Dies At The End also finds room for zombie skinheads, frozen meat-monsters, ghost doors, sentient animals and a TV infomercial psychic named Albert Marconi (Clancy Brown). Like Bill & Ted, A Town Called Panic or even Coscarelli’s own Bubba Ho-Tep, this is a film that forsakes traditional narrative and structured storytelling in favour of a surreal, stream-of-conscious procession of nonsensical set pieces loosely tied together by a few lines of narration and one determined editor. Unlike those films, John Dies At The End follows a non-linear approach, jumping back and forth in time as the filmmakers see fit.

From Chase Williamson’s dry, unfazed voice-over at the film’s outset, you immediately have a sense of what John Dies At The End has in store. As Dave ponders whether or not a recently repaired axe is technically the same one that killed a neo-Nazi hick now resurrected and looking for revenge, it’s clear that there is no point forming expectations or making predictions. This eccentricity and unbridled glee in beggaring belief is often entertaining — a stand-out scene sees Dave conversing with John’s disembodied spirit through the medium of a hotdog — but soon you begin to miss the simple satisfactions of character development, dramatic tension and, well, a plot.

Thankfully, the actors are charismatic enough to carry much of the burden, meaning that you’re never truly bored even when the story has gone off on its umpteenth tangent and ceased to make any sense whatsoever. Williamson is great in the leading role, revelling in the absurdity of the script as he fires off yet another round of quick-witted quips or surprisingly profound philosophical questions. Rob Mayes is a lot of fun too as the eponymous John, while Paul Giamatti is obviously having a good time as the sceptical journalist listening to the story unfold. It’s also nice to see Doug Jones on one of the rare occasions he is not buried beneath a few pounds of prosthetics. Here he appears as an inter-dimensional traveller with a thing for space-slugs. 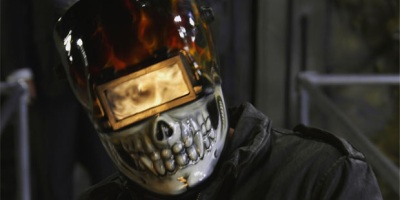 Bonkers, bizarre and occasionally brilliant, John Dies At The End is one of those movies that dares to be different. Unfortunately, in his determination to be flippant, unpredictable and obtuse, director Don Coscarelli has deprived his film of dramatic weight. Whether or not John does die at the end, it hardly matters. And that is both the film’s biggest success, and it’s ultimate failure.

Previous: 21 and Over
Next: Robb Stark to play Cinderella’s Prince Charming