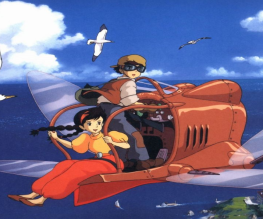 It’s a testament to how brilliant Hayao Miyazaki is, and how he doesn’t simply try to make the biggest, most fantastical animations around, that Laputa: Castle In The Sky, a riotous adventure romp, was actually made two years before the subtle, quaint magic of My Neighbour Totoro. Furthermore, the fact that this film was made in 1986 proves that Studio Ghibli have really been kicking ass for quite some time now.

Castle in The Sky is one of Miyazaki’s more raucous affairs; a calamitous frolic through a world of sky pirates à la Stardust and mythical castles in the sky (funnily enough). From the off we are introduced to this strange world that, like a lot of Miyazaki’s creations, seems to exist in between being old-fashioned and industrial and being a futuristic world of flying cruise ships. As we begin Pirates are attacking one of these, where the young Sheeta resides with a seemingly rather precious necklace. In trying to escape she falls from the ship and plummets towards her certain death. A pretty bloody great opening, really. So Sheeta turns out not to be dead, but her precious stone turns out to be very precious indeed and magically helps float her down into the arms of a young boy, Pazu. The two must find out why the pirates and the army are stumbling over each other to get to the stone, whilst uncovering the truth about the stone itself and its connection to the mythical land of Laputa.

Unlike the later Spirited Away, or even Howl’s Moving Castle, Laputa doesn’t rely on the magic and fantasy, but more simply good old fashioned action, with guns and planes and explosions and stuff! Like its two successors, though, it does exhibit a brilliant set of characters that become a kind of makeshift family, just like all those disparate fellows in Star Wars become such a close bunch (well maybe not that much), and it makes you care for them and want them to succeed.

It’s this combination of fantastic action, camraderie and touching moments that makes this film great, and a pleasurable watch for almost anybody. Add the beautiful, mythical flair of Miyazaki’s imagination to what is at its most basic level a story about two orphaned children connecting through a shared adventure, and you don’t get much more adorable than that. Try to watch it in the original Japanese if you can, if not so you don’t have to suffer through Anna Paquin’s accent ricocheting back and forth between English and American, but mostly because you need to give these films the respect they deserve. 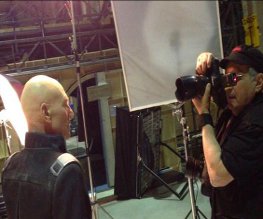