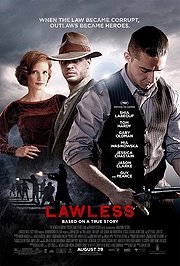 John Hillcoat’s prohibition tale of bootlegger brothers in Franklin County opens with the brothers as children, stood in a barn stoically watching the youngest try and kill a pig. When he can’t muster the courage, the eldest brother climbs off the fence, cocks his rifle and shoots it through the head. And thus, as we fade forward to 1931 and the pig quietly keels over, blood streaming from its forehead, the tone of Lawless is set. It’s going to be about brothers and there’s going to be an awful lot of blood.

Written by musician Nick Cave and based on the novel The Wettest County in the World by Matt Bodurant, Lawless is the (probably a bit) true story of the author’s grandfather and great-uncles, the notorious Bondurant brothers, Howard, Forrest and Jack. It’s prohibition time in America and everyone in Virginia is makin’ moonshine, but no one so well as the Bondurant boys of Blackwater station. The subject of a local legend that claims they’re immortal, they’re keeping themselves to their honest-but-violent hillbilly selves until the big time law arrives from the city for a piece of the action. Refusing to pay taxes on their cargo, the brothers find themselves at war with Guy Pearce’s vain, psychotic villain, corrupt Special Agent Charlie Rakes.

Meanwhile, back at the ranch, beautiful dancer Maggie (Jessica Chastain) has escaped her past in the city and come to work for the Bondurants, and baby brother Jack (Shia LeBeouf) is simultaneously courting the local Mennonite preacher’s daughter (Mia Wasikowska) and trying to prove himself to his brothers by running hooch to his gangster idol Floyd Banner (Gary Oldman). Despite some stunning supporting turns from the likes of Oldman (who could have had hours more screen time), the film is really carried by LeBeouf, and Tom Hardy as hulking eldest brother Forrest. Suffering from classic middle-child syndrome, amicable Howard (Jason Clarke) doesn’t get much of a look in, he just gets drunk a lot and smashes up inanimate wooden objects and people’s faces. The smashing of faces (and indeed collar bones, knees, arms, legs and ribs) quickly becomes a popular motif so be ready to spend a lot of time hiding behind your fingers.

About to rocket to super-stardom as Bane in The Dark Knight Rises, Hardy (Inception) is superb as honest, cardigan-wearing Forrest. Most of his dialogue is grunting, but by gosh does he do a good grunt. It’s a shame he has to hand the lead to LeBeouf because Jack’s coming-of-age tale is nothing like as interesting as anything Forrest is doing, up to and including sitting silently on his porch wearing his omnipresent cardigan. Marking LeBeouf’s official transition into films that don’t involve Decepticons, it’s evident from his performance in Lawless that he’s as desperate to prove himself to us as Jack is to prove himself to his brothers. For a while it’s difficult to get your head around the idea that he’s not just Sam Witwhicky dressed as a hick and, though he eventually grows into his character, he is outshone at every turn by the rest of the cast.

Lawless is by no means flawless. Based on a book written by a grandchild, you can only expect this particular jar to be served with a hefty dose of bias, creative license and romanticising of characters. There’s also some questionable narrative and women so beautiful they would never fall for those dirty Bondurant boys, but the dialogue is so snappy, the punches so punchy, the laughs so unexpected, the acting so fantastic and the cinematography (courtesy of Benoit Delhomme) so beautiful, that we’re more than happy to jump aboard this bullet-riddled Buick for some good ol’ fashioned bootlegging fun.