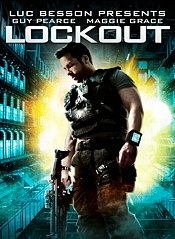 We should probably kick this whole review business off with the following piece of information: in Lockout, Peter Stormare’s character is called Scott. Now, of all the actors in the world who could plausibly play a character called Scott, Peter Stormare is SURELY not one of them. That should tell you what kind of a film Lockout is. It exists in a parallel dimension where people are inappropriately named and, when someone gets shot in the leg, another person drapes a lab coat around their shoulders because that should help with the huge gaping bullet hole in their thigh. Saint & Mather have their fun and the lack of logic doesn’t matter too much, seeing as this is a film set on a special space prison and everything. But still. Scott? Really? So “Scott” is one of those secret service assholes who’s always getting in the way of a maverick like Snow (Guy Pearce). He’s our hero and his name’s Snow! It’s probably because of his ice cold wit. Anyway, the film opens with Snow getting interrogated by “Scott” about some business that went down in a hotel room where some guy died and something something with a briefcase? THIS IS A SET-UP YOU SET ME UP etc. Elsewhere the president’s daughter Emilie (Maggie Grace) is on a “humanitarian mission” visiting a huge space prison where all the prisoners are kept in stasis for the duration of their sentence. But when one of the prisoners (Joe Gilgun) escapes, releases all the others from stasis and starts shooting the hostages (someone get these people some labcoats STAT!) it’s up to Snow to save the president’s daughter. He’s taken into space and just kind of climbs inside the prison in a spacesuit (in 2079, space travel is VERY easy) and, you know, they have to get out before the space prisoners take over/the space prison falls out of orbit and smashes into the Eastern Seaboard. Usual stuff. Much like its nineties predecessor The Rock, Lockout is very playful in its approach, but doesn’t ever really commit to sticking its tongue fully in cheek. The result is a script which trundles along half-heartedly rolling out its paper thin plot and every once in a while pops out the odd funny gag, largely delivered by an inappropriately laconic Snow, who sort of just strolls around having bants with the hottie for the whole film. Joe Gilgun picks up the rest of the slack humour-wise, delivering the most lively performance out of the bunch. But humour aside, it’s really rather hard to root for any of these characters. At one point, “Scott” is telling the president that they have to blow up the space prison, killing Emilie but in the process saving it from crashing to earth. The president is all “no you can’t do that” (seriously, this guy’s performance is so weirdly unaffected and neutral it reminded me of those guys from Futurama) and it’s like, are we actually supposed to agree with him? Is “Scott” supposed to be in the wrong here for wanting to sacrifice Emilie in the place of the EARTH? Blow that bitch out of the sky already! “Scott” is literally saving the world right now. (You’re my hero, “Scott”). Ultimately, Lockout is good fun, but disappointingly predictable and derivative to the point that it becomes a little boring. It’s like, come on guys who made this film! Invent some cool space stuff! Even the futuristic motorbike in the opening sequence is plucked right out of The Dark Knight. And effects-wise, Lockout often resembles a very hi-tech videogame, in place of a big-budget blockbuster. At times funny and likeable (due solely to the performances of Pearce and Gilgun), but largely bereft of genuine dramatic tension and interesting characterisation, Lockout ends up being a bit of a washout. BAZAM.