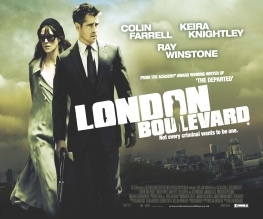 Good British gangster films are usually incredibly enjoyable to watch. They show off characters who we dread encountering in the real world, but who we love to see on screen. Violence is exposed, shady deals laid before our eyes to see – we can witness first hand what it means to exact fear and power over others. Pretty awesome right? And what the films all rely on for that purposeful effect, are great characters and a genuine story. We need to believe that the people on screen are capable of the things they plan and then play out, and are doing it in a realistic setting. So while London Boulevard definitely accomplishes the former to a degree (and by that I mean it has Ray Winstone as the baddy) the weakness of the story and the lack of immersion halt it from ever becoming truly engaging.

Mitchell (Colin Farrell) is released on parole from Pentonville prison for GBH and is snaffled back to civilian life by dodgy mate Billy (Ben Chaplin). After a quick visit to Mitchell’s new home, he suits up and sets out to join Billy at the local pub for his welcome-home party. Before arriving though, he helps a young girl avoid some potential thieves, cutting quite the dashing figure in his suit, which in turn leads her to offer him a job. Very obviously discontent with the criminal fraternity he seems to be surrounded by, and eager to get out, he agrees to meet with the girl’s friend who is actress and paparazzi magnet Charlotte (Keira Knightley). From there its all downhill as Mitchell attempts to get away from the clutches of “Boss” Gant (Ray Winstone); all the while helping Charlotte deal with the paparazzi. The good stuff first. Ray Winstone is great. Being somewhat typecast as the quintessential don of London, he nevertheless performs this task very well and while not overly frightening, more brutish really, he fits the role of tough and business like criminal perfectly. You start to actually wish really that he would be a little more hardcore, bite the head off of a ferret or something like that. Farrell does a good job and while failing slightly in the accent department, he looks good and is, possibly more importantly, hard as nails. Shown off nicely whenever he smashes someone’s face against something. And now the bad. The story, while initially engaging, loses all of its impetus past the first thirty minutes. Great swearing and such aside, it jumps to and fro as if unable to decide what to do next, with the cuts being sharp and often abrupt. I realize this was done on purpose to try and up the pace, even set up some of the sub plots (there are dozens, none of which are conclusively dealt with), but with the story being so indecisive the editing then doesn’t do the film any favours as it just adds to the inconclusive nature.

Then there is Keira Knightley and Colin Farrell, and their pseudo love story. I say pseudo because if there was a hint of attraction or chemistry there, I’m sure that not even the Hubble could detect it. While it was the obvious progression, that the two fall in love, you don’t actually ever see it. They just meet, chat a couple of times, Farrel beats some photographers and then they get to business. It’s actually quite perplexing. See how upset Colin is about that… But then there is the most glaring problem of all. London Boulevard is trying ridiculously hard to be like Layer Cake. That film’s iconic ending scene, encompassing the main character XXXX’s (Daniel Craig) tragic attempt to leave behind his criminal life, is copied so blatantly in London Boulevard I’d be surprised if the angle of the top down shot wasn’t identical on both films. Seriously. I realize every story is just a copy or reinvention of a previous one, but the conclusion definitely smacked of bad Photoshop. In the end London Boulevard has good intentions, but unfortunately they go down the same road those kind of intentions usually do.