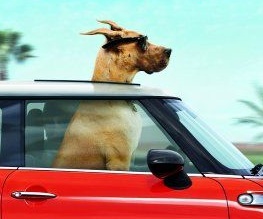 Considering the titualar pooch of Marmaduke has been rolicking across comic-strips for over 50 years, you’d think that there’d by more than enough material to make this outing a loveable family comedy. Sadly though, lazy scripting, reliance on an all-star cast and disappointing laughs means this summer flick is more bark than bite.

We meet The Winslows, a happy-go-lucky family from Kansas whose dog Marmaduke lives a life of luxury. He’s pals with the kids, he’s got a feline sidekick (George Lopez) and he’s voiced by that scrappy Owen Wilson – what more can a dog want? However, when Dad gets a new job, the entire family are forced to re-locate to California where Marmaduke begins to realise he’s no longer top dog. A run-in with alpha stray Bosco (a great Keifer Sutherland) and his no-nonsense girlfriend Jesebel (a fairly inoffensive Fergie) shows Marmaduke that he really isn’t in Kansas anymore. Can the loveable pooch find his own place in this pack, whilst helping to juggle the responsibilies of his newly-uprooted family?

The problems with Marmaduke are many and dull; stretching from not understanding their audience (do we really need magic mushroom references in a film for the under 10s?) to laboured laughs (whilst two dogs get soaked in the rain, one complains “It’s raining cats and us!”. It’s probably the best joke in it.) The cast do their best with the material, and their natural charm does help an awful lot – the addition of Steve Coogan and Christopher Mintz-Plasse is a blessing – and there’s enough sparkle to keep the dialogue afloat. Just. The film doggle-paddles along for the first hour, and only really gets into its stride in the lead up to the final action sequence, which is energetic enough to keep the kids still until the credits roll.

All in all, it just seems a great shame that 50 years of loveable high-jinks has been reduced to, essentially, two hours of dogs farting. However, with such a stellar cast it’s still got more to offer than CGI rival Cats And Dogs 2: The Revenge Of Kitty Galore, so if you’re hankering for an eye-popping, tail wagging romp this summer, you might as well go for this one. Or, alternatively you could go and watch Toy Story 3. Maybe do that instead, eh?

What did you make of Marmaduke? Let us know…

Previous: The Vanishing On 7th Street trailer online
Next: Tim Burton working with writers of Ed Wood for The Addams Family and Big Eyes