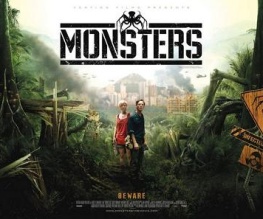 The hype around micro-budget alien flick Monsters has been frankly unfathomable. Rumours have abounded that the entire production cost only $15,000 (the actual budget was just shy of half a million; the oft-quoted figure refers only to equipment costs), and rabidly excited write-ups in several major movie magazines have led it to be cited as, amongst other things, the new District 9. It may be that my adolescent exposure to potentially hazardous quantities of H.P. Lovecraft have rendered me immune to big stupid octopus things, but I really don’t see what all the fuss is about.

A space probe is dispatched by NASA to investigate the possibility of alien life within the solar system. However, upon re-entry it breaks up over Mexico, scattering the samples it collected – samples which give rise to a plague of huge, aggressive aliens which destroy all in their path. Pretty standard sci-fi set-up, it’s true – but Monsters, which ran with the taglines “They’re not aliens. They’re residents” and “Now it’s our turn to adapt”, is set six years after first contact, with half of Mexico designated an ‘Infected Zone’ and life continuing more or less as normal around the massive squid bastards.

Cue the film’s only two actual characters, cynical photojournalist Kaulder (McNairy) and elfin newspaper heiress Sam (Able). Sam’s father – and Kaulder’s boss – commands the lackadaisical freelancer to get his daughter safely back to the States, but things start to unravel when his ill-advised jaunt with a local hooker permanently separates them from their passports. Devoid of money or ID, the pair are forced to enter the Infected Zone in the hope of trekking to the US border without encountering any tentacular menaces. But wait, what’s this? Sam’s got a fiancé and Kaulder’s a twat, but it seems the apparently ill-matched couple are finding unexpected common ground and bonding as a result of their incredible shared experience! Golly gosh.

Call me a purist, but I think that if you call a film Monsters the audience is within its rights to expect a reasonable proportion of monster-based screentime. This flick simply doesn’t deliver. It is a sci-fi film with almost no sci-fi components and a thriller which spectacularly fails to thrill; in real terms, Monsters is an insipid love story taking place over the course of a road movie. Director Gareth Edwards chose to vaguely storyboard each scene and let the dialogue develop organically rather than actually write it, which is fine if you’re Mike Leigh and have some real actors at your disposal but doesn’t work so well with a cast composed of Mexican bystanders and two ex-CSI morons who, one suspects, couldn’t have read a script even if one existed.

It’s not fair to beat up the aliens for looking crap – microbudget films do get some leeway on that front – and with the exception of their bizarre cameo Monsters is visually rewarding. The cinematography would be superbly atmospheric if there was any sort of atmosphere for it to capture, so it settles for being evocative and engrossing, capturing the lush Lost World-esque landscapes of the Infected Zone with style. And it’s inarguable that the central premise of the film is a superb idea which does indeed carry overtones of District 9 in its attempt to imagine how humanity would deal with the eventual banality of alien life on Earth. I was so looking forward to Monsters and I desperately don’t want to condemn it – it’s just SO BORING. The cast is talentless, the dialogue is flat, the plot is broadly non-existent and the ending is the worst I have ever seen in my life. A crushing disappointment.

Previous: WIN Classic Christmas movies!
Next: James Franco and Javier Bardem to clash in Wrath of the Titans?