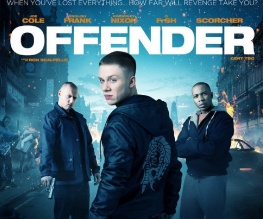 “Bend over, open your arse cheeks, cough”. That is perhaps the longest bit of dialogue in Offender and the most well structured which is really saying something. What does the world need more of right now? Love? That’d be nice. Money? Always pretty useful. The one thing it has plenty of are bad, British prison dramas. Offender is a combination of other similarly unimaginative films like Shank, Adulthood and Screwed, drawing on the pain of the disenfranchised youth and then shoving them all in a young person’s correctional facility together to slug it out.

Offender opens with the usual urban badass soundtrack as we see Tommy (Cole) walk through the dark streets of London and assault a police officer. He is sentenced to two years in a young persons’ correctional facility and looks pretty darn pleased with himself about it. Once inside though things begin to change as the Senior Officer (Dooley) takes a serious dislike to Tommy and threatens to make his life hell. Tommy however is on a mission. He deliberately got put inside so he could exact revenge on the men who brutally attacked his girlfriend Elise (Nixon) and killed his unborn baby. One by one, Tommy begins to slowly get to the gang of thugs but faces a more serious challenge when it comes to kingpin Jake (Frank), who is less like a bruiser and more a complete haemorrhage. 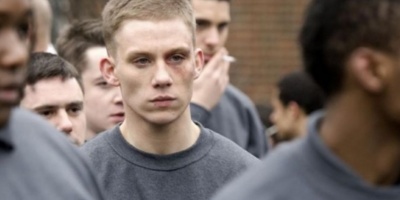 We have a real problem in England at the moment which came to head in the riots last August. The reasons for why this happened are hotly debated with lefties shouting about unemployment and unhappiness and the righties shouting about J.D Sports and plasma TVs. What Offender manages to do is not shout about anything in particular, although there are a few utterly random bits where Tommy yells like a dinosaur with PMT. It is a real shame that writer Paul Van Carter squandered a perfectly good opportunity to go a bit deeper into the psyche of the working class and present us with something more than a boring love story, shanks and crack.

The gang of bad guys led by evil Jake (yes, I use evil as there is no subtlety whatsoever to the part) are involved in a looting the night of the London riots and shoot a man dead. That is all we see of this major event and actually have to watch more images of burning toilet paper being thrown out of prison windows in slow motion than dialogue about why the characters act the way they do. There’s no memorable dialogue at all, especially not from Frank English who showed that after this first acting role perhaps he should stick the day job (rapping…obviously). He makes the evil Jake into a hilarious clown-like character acting not just Roger Moore style with his eyebrows, but with his entire face which moves maniacally about like a dancing ferret with crazy eyes. See exhibit A: 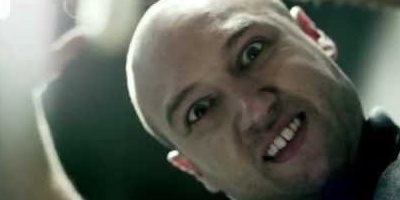 Joe Cole as Tommy however is very good. He is a bundle of frantic yet restrained energy in a slight frame with face that just says ASBO. He is wasted in this film however with a lack of any emotional development. However, by the millionth slow motion flash back of Tommy and his girlfriend you lose all invested interest in his story and begin to not care that Elise got smashed in the face and lost the baby. Most worryingly of all I was under the impression all the way through that we would find out that Elise had actually died, giving Tommy this nothing-else-to-lose mission. This however is not the case which makes you wonder why Tommy is throwing his life away going after Jake. It makes no sense whatsoever.

There is one very touching moment in Offender but even that is ruined by the terrible directorial choices. Tommy asks another inmate to help him make a shank so he can go after Jake’s gang. In return, the other prisoner asks Tommy to help him write a letter to his girlfriend as he can’t. This should have been touching moment and give us a glimpse into the lives of some of these young offenders, however Scalpello chooses instead to show us a guy rapping some lines instead of seeing Tommy help write the letter. Emotional moment ruined. By choosing to opt for style over substance he brushed away the one glimmer of hope this film had.

Offender is full of gangsta rap, fights, corrupt policemen and more slow motion scenes than you can shake a shank at. If you are looking for great prison dramas then best to stick to The Shawshank Redemption; no rapper-turned-actor has anything on Tim Robbins. http://credit-n.ru/credit-card-single-tinkoff-platinum.html http://credit-n.ru/offers-zaim/viva-dengi-credit.html