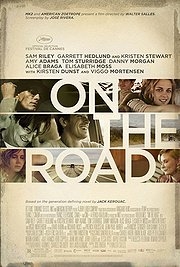 Jack Kerouac’s seminal novel set against the backdrop of the burgeoning Beat movement was viewed by many as a novel unfit for big-screen adaptation largely due to its freehand and sometimes barely coherent structure. It is no surprise then, that On The Road‘s hazy narrative form is alienating and obtuse. Sam Riley’s gravelly narration as Sal Paradise is the only anchor in a sea of hedonism and bromance, sex and roll-up cigarettes, jazz and automobiles. When the tide is out, the viewer is left insecure and lamenting the lack of an innate quality that would have allowed them to fully appreciate the apparent ‘specialness’ of the characters they saw before them.

In muted shock following the death of his father, disillusioned writer Sal Paradise (Sam Riley) is battling writer’s block when he makes the acquaintance of the alluring Dean Moriarty (Garett Hedlund), a drifter and ex-con who has just married sixteen year old Mary Lou (Kristen Stewart). Feeling inexplicably drawn to Dean and his wholehearted rejection of conventional life and all its restrictions, Sal takes to the road. His travels take him across America and introduce him to various characters, all of whom have a host of idiosyncrasies and stories to tell. Freewheeling across the U.S, resisting the proposed life of conformity that was accepted as their due, Sal and Dean represent the maverick quality that saw an entire generation adopt black slang, jazz music and poetry to subvert societal norms.

As Sal Paradise Sam Riley is a window the audience can use to observe Dean and his aficionados, rarely getting the opportunity to become a fully realised character in his own right, but using his remarkable charasmatic voice and ability to bounce off of the more extreme characters to ensure the audience remember him. Garret Hedlund is the undeniable star of the show and the film is at its best when it focuses on the heartfelt camaraderie that exists between the two male leads. Dean’s fluid sexuality and restless spirit is chronicled well, imbuing him with a nomadic air that makes for compelling viewing and captures the spirit of the elusive ‘Beat.’ 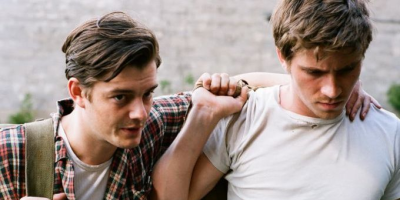 Together Sam Riley and Garret Hedlund share a chemistry more potent than that found in most romantic dramas and certainly more than the passion shared between Hedlund and Kristen Stewart, whose moments on screen are thankfully brief and inoffensive, if a tad bland and under-developed. The film is rife with incidental cameos from Amy Adams, Elisabeth Moss, Kirsten Dunst and Steve Buscemi, all of whom do the best with the parts they’ve been given, but are ultimately just distractions from what has to be the biggest exercise in on-screen bromance since Top Gun.

The problem with On The Road, is the consistent lack of contrast. Identikit sequences depicting an excess of drugs and sex and waffling poetic conversations follow one after the other, but what of the convention that Sal and his friends so ardently reject? What exactly is so terrible about the life they are running from? Put simply, why so angsty? Without the historical context that would answer these questions, On The Road‘s significance becomes diminished into a bunch of good-looking young adults, drinking and engaging in casual sex who are lauded as demigods simply because they had the temerity to do it first. Perhaps that is the thrust of the film, and if so there is nothing wrong with that, but with the visually stimulating sprawling location shots of Sal’s travels, his encounters with jazz musicians (Terrence Howard), tortured homosexual poets (Tom Sturridge) and other-worldly teachers (played by a scene-stealing Viggo Mortensen) it felt like Walter Salles was trying to communicate more than that. 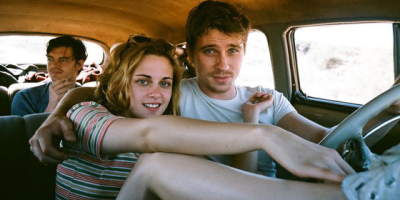 Disappointingly, opportunities to add some depth to the proceedings – the significance of jazz and black culture to the Beat movement for example – are not fully exhausted. If viewers come to this film ignorant of the Beat generation, they will not find that ignorance much changed come the film’s end. Walter Salles has tried too hard to modernise the book’s concept and has ended up delivering a rather trite and ‘hipstery’ perspective of an important historical development. On The Road may have the power to induce existentialist epiphanies for some, but on the whole viewers will be disappointed at the surprising absence of daring and substance in a film derived from a source that did not lack either.

Previous: Carrie teaser is bold and bloody
Next: Orange(Wednesday)s and Lemons #89