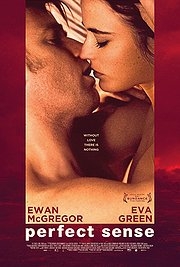 Perfect Sense is essentially a film about humanity in the face of disaster – a familiar concept in cinema today with numerous apocalyptic big-budget movies and end of the world thrillers. But with this new release, David MacKenzie aims to simplify this idea and focus on the emotional responses to these events, and in particular the significance of relationships under such circumstances.

Set in Glasgow, the film follows Susan (Eva Green), a scientist, and Michael (Ewan McGregor), a chef, as they are brought together through disaster. Early in the film Susan is called into hospital to evaulate a truck driver who, after a sudden emotional breakdown, has lost his sense of smell. Soon the problem spreads and the world is perplexed as people everywhere lose their ability to smell, providing the opening turn to the film’s dramatic events.

As the narrative unfolds, Susan and Michael find themselves growing ever closer, and amidst this instability a basic love story emerges between the two characters. They embark on a romantic and sensory exploration that is both a product of and reaction to the world’s disaster. Susan and Michael seem to be at their most connected only in the depths of loss, and often break apart at points of calm or happiness, which questions the basis of their relationship and seems to illuminate when love is most vitally needed. The apocalyptic world is very much the setting rather than the subject of the film, as MacKenzie resists dwelling on media fear or mass violence, but instead focuses on the most primitive needs of the individual. This is what makes Perfect Sense stand out from other disaster movies; it is an insular disaster and, working almost exclusively on emotional levels, an insular film.

MacKenzie handles his unusual subject matter with great skill, often drawing attention to a sense at the moment it is being taken away; just before Susan becomes deaf we are faced with a crescendo of violins before the film plunges into silence. Voice-over narration and shots from Mexico, India, and Kenya are what really emphasise the angle that MacKenzie is working from as they exhibit the universality of emotion around the world, and widen the perspective of the film itself to a more philosophical level. Yet among this discussion are lighthearted comedic moments along with scenes of more classic apocalyptic action that all make the film very well rounded. A convincing and affecting portrayal of the demise of humanity, Perfect Sense comments on the adaptability of man and the nature of love – heavy themes and a tall order to get right. But at no point does the film force its ideas, instead it encourages a level of participation by asking questions, certainly the most pervasive of which is the question of ‘being’ when all five senses are lost. What is left when we cannot smell, taste, hear, see, or feel?

Perfect Sense is successful in terms of skilful direction and a beautiful aesthetic, which enhances the viewing experience in very unusual ways. Although there is little character development beyond their relationship, McGregor and Green are consistently strong in encouraging an emotional involvement in the film. As a sci-fi romance movie, Perfect Sense is purely original, exciting, thought-provoking, and certainly worth your time.