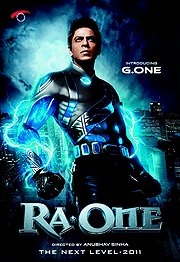 Where to begin? RA. One is one hundred and fifty six minutes of genre-blending madness, complete with robots, singing, dancing, multiple deaths, and dancing. And it’s hard not to love every second. Like many Bollywood films, RA. One is an action/romcom/musical with a family drama at its heart. Good family values and morals run through this film – particularly a bizarre obsession with the perils of smoking – and the central thread revolves around the relationship between a young boy, Prateek (Verma), and his father.

Prateek is a street-smart computer whizz whose father, Shekhar (Khan), is the world’s most embarrassing dad. Complete with yellow VW Beetle, a head of Jonas brothers curls and the tendency to do things like performing a Michael Jackson dance in front of Prateek’s friends (classic dad behaviour obvs), Shekhar is a constant embarrassment to his young son. He also happens to work for a video game company developing highly sophisticated virtual reality software. Just so you know. Because that could come up.

In his boring school lessons, Prateek dreams of a hero called Lucifer who resembles an idealised version of his father – strong and brave, unlike the real Shekhar who can’t even face up to an inept mugger on the streets of London (coincidentally, one who can speak fluent Hindi). In an attempt to impress his son, Shekhar comes up with the ultimate video game baddie, RA. One (a play on the name of Hindu demon, Raavan) who promptly breaks out into the real world, hell-bent on wreaking vengeance on Prateek, who defeated him in the game. It is left to Prateek is free RA. One’s nemesis, G. One – modelled on Shekhar’s image – from the computer to help set the world to rights. YOU FOLLOWING? In terms of its sci-fi aspects, RA. One borrows heavily – and heavy-handedly – from its predecessors, The Matrix and, most notably, Terminator 2. Outside the world of the game, RA. One has the ability to morph into other identities à la Robert Patrick’s T-1000, and subsequently dons what appears to be a Neo outfit. But it’s all just a bit silly. Sinha’s huge budget (the film allegedly cost 1.75 billion rupees to make) means that the action and effects aren’t unimpressive, but ultimately the story doesn’t seem too interested in its sci-fi premise – which is also muddled by a very convoluted explanation of how the game works. In the end, RA. One is more concerned with entertaining its audience in every way possible. What is left when you strip away the crunchy sci-fi coating is a rambling, self-indulgent piece of crowd-pleasing nonsense. But sometimes nonsense is just the best. Once Prateek, his mother Sonia (Kapoor) and G. One have fled to Mumbai to escape RA. One, the film pretty much turns into a romantic comedy almost along the lines of the Farrelly Brothers. G. One’s attempts, for instance, to blend into society and become acquainted with human behaviour provide some of the best moments – such as spanking Sonia after he has seen a character do the same in an English soap opera (at least I think that’s what that was meant to be). These moments resemble those scenes in Kenneth Branagh’s recent Thor, where, for instance, Chris Hemsworth’s eponymous hero walks into a pet shop to demand a horse. But where Thor shied away from going full-out daft, RA. One grabs the daftness, takes it for a drink and then home to meet the parents. The point is, Sinha’s big bucks sci-fi doesn’t take itself too seriously. And that’s what makes it such a joy to watch. 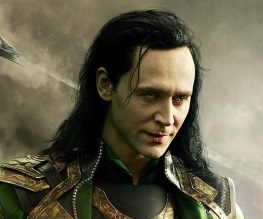