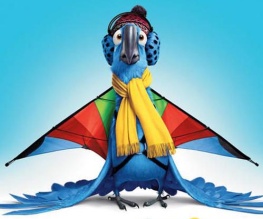 Blu (Jesse Eisenberg) is a blue macaw, who lives in domesticated bliss in Minnesota with his owner Linda, until they are paid a visit by ornithologist Tulio, who tells them that Blu is the last male of his kind. In order to save the species, Blu and Linda head off to Rio de Janeiro to meet Jewel (Anne Hathaway), the last female blue macaw. Of course, things are never that simple, and Jewel and Blu end up in the hands of greedy smugglers. In their attempts to escape they meet several colourful characters and get caught up in the Rio carnival. Their journey is made more difficult by the fact that Blu and Jewel don’t really hit it off and Blu has never learnt to fly…

There is much for children to love about this film; the problem is that Pixar has set the bar so high for animated films, with stories and jokes that include both older and younger generations, that adults have come to expect a lot more from cartoons. Rio will keep children entertained and there is the obligatory moral banged into the storyline – believe in yourself, follow your dreams – which suits the kids, but feels heavy handed for those beyond their first decade. There are a couple of jokes aimed at adults, but they feel as though they have been shoehorned in and aren’t entirely sophisticated. The animation is beautiful; the down and feathers on the birds look wonderfully soft to the touch, and a Rio in full carnival swing was a great choice of setting. The animators make the most of the riotous colours and fabulous floats, as well as the various exotic birds to be found in the jungle. Rio’s 3D is subtle and suitable, though I don’t think it would lose much without the extra dimension.

The characters themselves will serve for children, but adults will find them a little irritating. Jesse Eisenburg’s voice is amazingly annoying when transferred to a bird pedant and is absent of the dry wit that accompanies his usual films. The trend of putting famous names and voices behind the cartoons may do much for the advertising campaign but doesn’t add to the film. Saying that, Jamie Foxx and Will.i.am make cameo performances which actually work well when they show off their musical stylings to lead a impromptu fiesta. Jemaine Clement (Flight of the Conchords) provides the feathery villain of the piece with the requisite English accent, the absurdly named Nigel who is suitably threatening. The OTT storylines that can (somehow) believably be given to animal characters don’t quite work with the humans, and I felt a little uncomfortable with the brief social commentary on the lives of favela children – a worthy try but it jarred with the rest of the happy-go-lucky tone. And happy-go-lucky it certainly is, with a party air permeating the whole film, with music and dancing to match.