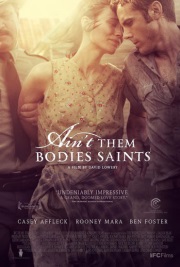 I don’t know much about Terrence Malick. But then again, I don’t know much about Alfred Hitchcock either, and it doesn’t stop me knowing that Disturbia is a rip-off of Rear Window. As literally every other critic on earth has noted, Ain’t Them Bodies Saints appears to be a homage to Malick’s love of trackless Southern landscapes, coruscating natural light and intense, underwritten characters. It’s a capable imitation, and just about watchable in its own right – but David Lowery must have more to offer than this.

We’re in Texas, probably in the 1970s, and Bonne & Clyde-alike outlaws Bob (Casey Affleck) and Ruth (Rooney Mara) are at the climax of a crime spree that has finally led the fuzz back to their hideout. In the inevitable gun battle, the third member of their gang is killed and Ruth manages to wing a sheriff before she and Bob give it up, snatching a moment to mutter to each other before they’re pulled apart by police. Since we’ve just heard that Ruth is pregnant – it’s a good thing lens flares don’t harm the baby – nobody’s surprised when Bob subsequently takes the rap, condemning himself to a long stretch while Ruth successfully lies her way out of sharing his punishment.

Fast forward four years and, after six failed attempts and roughly eighty thousand letters written in his oddly jerky handwriting, Bob absconds from a work party and goes on the lam. Ruth has never given up hope of him returning to her and their daughter, but her adoptive father (whose real son was the unlucky third wheel in Bob’s gang) urges her to stay away from him. Meanwhile, upstanding local bobby Patrick Wheeler (Ben Foster) is gently trying his luck with this wild, beautiful single mother, unaware that it was she who shot him. MEANWHILE MEANWHILE, Bob’s heading across country to find Ruth – but will he get there before he runs foul of one of the criminals he double-crossed in the past? So much tension! Quick, let’s have another sunrise.

I almost think I would have enjoyed Ain’t Them Bodies Saints more if it had been a silent film, challenging me to put my own story together from the endless procession of meaningful looks, light-sodden pastoral shots and hastily scribbled letters. It’s reminiscent of (stay with me on this) The Magic Roundabout, which was produced entirely in France before being rescreened in England with new, entirely unrelated scripts written by Emma Thompson’s dad – nobody with any sense is watching Florence, Brian and Zebedee for their wordplay, and the same is true of Bob and Ruth. The dialogue has so little bearing on what happens that you can just sink into the scenery and enjoy how pretty everything is without fretting about bothersome nonsense like narrative.

This also means you can ignore the ropier Texan accents (hi Rooney), although you wouldn’t want to ignore the performances themselves. Rooney Mara makes full use of a character who could have been a by-the-numbers tough bird, tying together the transition from outlaw to mother with a combination of little-girl-lost bravado and her trademark haunted eyes. Casey Affleck, who has even less to work with, breathes life into his barely-reformed baddie, just about balancing out the apparent contradictions in a character whose disregard for every piece of good advice he’s given is only outweighed by his inexplicable fondness for hitchhiking at gunpoint.

Ain’t Them Bodies Saints would make an absolutely beautiful short film – I’m thinking thirteen, fourteen minutes, love letter being read in voiceover but no other dialogue, not quite as many sunrises – but as a feature film, it doesn’t have anything like enough substance. After cutting his teeth with short films, David Lowery is quite right to stretch his wings a bit, and he’s been very lucky in his cast; the best thing he could do now would be to hire a writer, get out of the Deep South and make a film with no natural light at all. However gorgeous Ain’t Them Bodies Saints is (and it’s so, so gorgeous), lazy journalists like me will carry on calling him a cut-price Terrence Malick until he does something authentically his own.