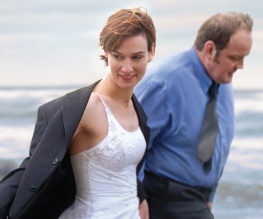 Oh, quirky French romances, will we never be rid of thee? As Paris’s boulevards become progressively more clogged with thousands of couples convinced that the City of Lights will renovate their failing relationships, indie directors are being forced into France’s less accessible corners in order to make yet more improbable love stories starring clearly incompatible people. Having said that, Angèle and Tony is quite good. Angèle and Tony opens with a relatively demure but still very energetic sex scene in, like, a bus stop or something. A young Chinese man whose name we will never need to learn pumps furiously away whilst Angèle (Hesme) leans against a wall, looking as if she’s making a shopping list in her head. Once he’s finished it becomes clear that this was more than a quickie, it was a transaction – Chinese Guy hands over a crap-looking action figure which he assures Angèle is an honest-to-God Shanghai Action Man. Angèle accepts it, nicks a bike and delivers the toy to an old man standing outside a school. The man is her father, the toy is a birthday present for the son she hasn’t seen in two years and Angèle is a recently-released ex-con. She doesn’t stay to sing Happy Birthday.

Instead, Angèle heads to another town to meet a man from a personal ad. She’s late twenties, slim and beautiful – he’s melting into early middle age, an overweight fisherman who lives with his mother and his male pattern baldness. They’re as shy as each other, but despite an apparent lack of chemistry Angèle almost immediately moves in with Tony and his growly mother Myriam (Evelyne Didi), taking his younger brother’s old room and helping on the quayside stall where Myriam sells Tony’s catches. Angèle is obviously more than happy to do whatever it takes to stay out of her parole hostel, but as she spends more time with Tony she wonders if there might be something more to this unassuming, kind and quiet man, so different from her truculent parents (who are trying to retain custody of Yohan). But does Angèle have it in her to rebuild her relationship with her son, let alone start a new one with Tony? Hopefully fatty acids or whatever fish have in them will help… The central premise of Angèle and Tony is disarmingly simple – so simple, in fact, that one suspects director Alix Delaporte felt she ought to throw some other storylines in to keep things jazzy. In fact they do anything but, rearing their little subplot heads once in a while before disappearing forever. Tony’s younger brother Ryan (Jérôme Huguet) is involved in some sort of dispute over fishing quotas (at one point he actually hits a riot cop in the visor with a gurnard or something) and also wants to hire some divers to sweep the bay for the body of his drowned father, neither of which issues are ever really mentioned again after they first turn up. Also, didn’t Angèle give Ryan the eye at some point in the first half hour? Oh well, she’s evidently forgotten. The wavering and unoriginal custody battle feels equally out of place, with a cursory scene of sulky kid + angry grandparents shoved in every time Tony’s sweating dome gets too much to bear.

That said, it’s not hard to ignore the extraneous nonsense and focus on what really is a very touching little romance. Clotilde Hesme is brittle and believable as Angèle, bringing to mind the mix of aggressive self-reliance and little-girl-lost nerves that Angelina Jolie brought to Girl, Interrupted, and Grégory Gadebois’ Tony is clumsy, earnest and genuinely lovable. Delaporte’s direction is confident if a little obvious, with frequent shots of Angèle wobbling along on her wonky bike so beautifully shot that the overt symbolism doesn’t seem to matter. Who needs subtext when you have saddle-text? Despite its various flaws, this is a bold début from a very promising director and a fine showcase for its talented stars. Next time someone tells you you can’t find love in a fishing village, point them towards Angèle and Tony’s quiet, unprepossessing courtship and prepare to be asked on a mini-break to Normandy. 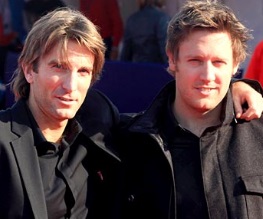