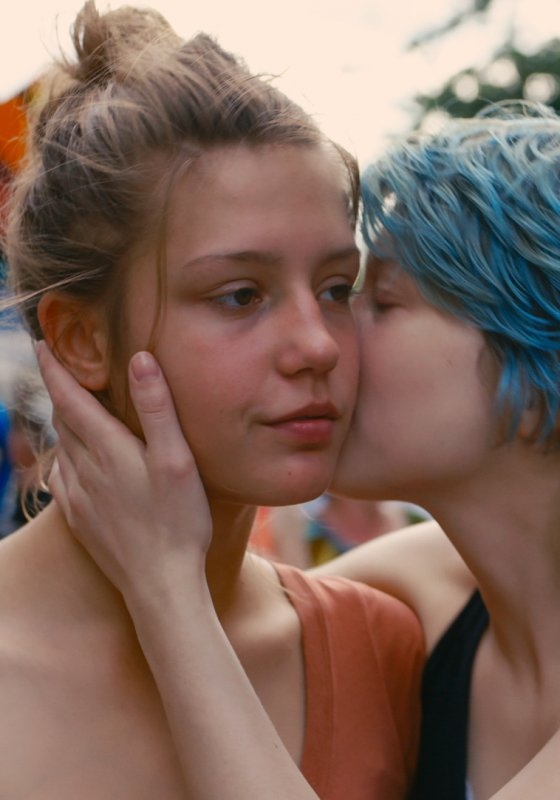 Sometimes, you find out something about a film after you’ve seen it that totally rocks your perception of it. Like watching 1995 supernatural-tween fantasy Powder and then finding out that the director molested a 12 year old boy. Or learning that the protagonist family in The Impossible weren’t actually rich Americans in real life.

Blue is the Warmest Colour is, objectively, a very good film. It’s not, by any means, a new story: girl meets boy; girl doesn’t really fancy boy even though boy looks like Drake; girl meets girl; girl DOES fancy girl; relationship plays out in entirely unsurprising fashion. But BITWC is willing to go deeper than most, and over its three hour runtime (honestly, you don’t really feel it) we genuinely watch these characters open up and fall in and out of love in real time, and we buy it.

Most crucial of all to BIWTC’s success is the performance by Adele Exarchopoulos as the lead, who’s also called Adele (the graphic novel of which this is an adaptation is called The Story of Adele – the reason for the title change is never apparent, though it’s hard not to spot that a lot of objects in this film are blue). Each largely improvised scene is observed from Adele’s perspective, so it’s no small achievement that she’s never less than compelling and absolutely convincing; not even for a moment. It’s a quiet powerhouse of a performance, and it’s deeply moving. Lea Seydoux’s older, blue-haired love interest Emma is less deftly layered, and less engrossing, but still great by any reasonable standard.

Then there’s the striking camera-work, around 90% of which is close-ups. It makes for a dizzying, visceral, intensely physical experience, and works best during crowded scenes, such as a student protest, or a claustrophobic dinner part, and quiet scenes of intense intimacy. During an early interaction between Adele and Emma, the long takes and phenomenal chemistry between the two leads as they resist a kiss that we all know is coming cranks up the sexual tension to unbearable levels.

But then there’s the sex scenes.

That they’re some of the more graphic and realistic sex scenes we’ve seen on the screen for quite a while isn’t really a problem; in a film where we watch chewed spaghetti as it moves around Adele’s mouth, it’s not exactly surprising that we end up watching her scissor Emma from a distance of about ten inches.

But what IS problematic – very problematic indeed – is that these scenes are ridiculously, stupefyingly long. The first of Adele and Emma’s sex scenes felt, no joke, about fifteen minutes long – and that’s a conservative estimate. It could easily be split into acts. And then, about five scenes later, there’s another one. And another. Overall, I’d guess that I spent about half an hour of BITWC’s three hour run time watching Adele have sex. In a variety of extreme close ups.

It gets worse. See, if these scenes were in the context of a movie about sex, directed by another woman, or directed with care and sensitivity towards the actors involved, they’d be annoying and disruptive to the narrative, but tolerable. But, hey, guess what, three strikes and out. The picture painted by not only the cast but seemingly every crew member besides Kechiche is one of long, arduous shoots (Adele and Emma’s first sex scene allegedly wrapped after TEN DAYS, and it’s worth noting that both actresses are straight) and obsessive, borderline abusive behaviour from Kechiche.

Lea Seydoux has spoken of feeling like “a prostitute” and “trapped,” and though some have argued that the scenes wouldn’t exist if the actresses hadn’t been in compliance, I think we’re all aware that just because you did something that someone else told you to, it doesn’t mean that you’re happy with it, or that it’s ok. She recently said “thank God we won the Palme d’Or, because it was horrible.” Kechiche responded by lashing out at everyone and demanding, impotently, that the film be pulled, claiming that the actresses have tarnished forever. Which, frankly, is exactly what we’d expect from someone who’d insist on 100 takes of a shot in an overlong lesbian sex scene between two straight women that has no business being in the film in the first place. He’s not invited to the Best For Film Christmas party.

Sex has a vital place in movies; it’s a key part of any relationship dynamic (even the lack of it), and ignoring that fact leaves you with an unfinished portrait. Blue is the Warmest Colour, the boldest attempt at presenting a relationship in its entirety on the big screen that I can remember, would be incomplete without an exploration of the finer and yes, more explicit dynamics of Adele and Emma’s physical interactions (most apparent, if heavy-handed, in contrast to her early sexual encounter with faux-Drake), and you’ll always get more interesting results when the presentation is authentic and graphic, without reservations or restraint. But that should be the only motive, and once the motive becomes muddy – regardless of whether the intent is pure or not – we have a problem. So yeah, Blue is the Warmest Colour is pretty good. I just can’t, in good conscience, recommend that you actually watch it.