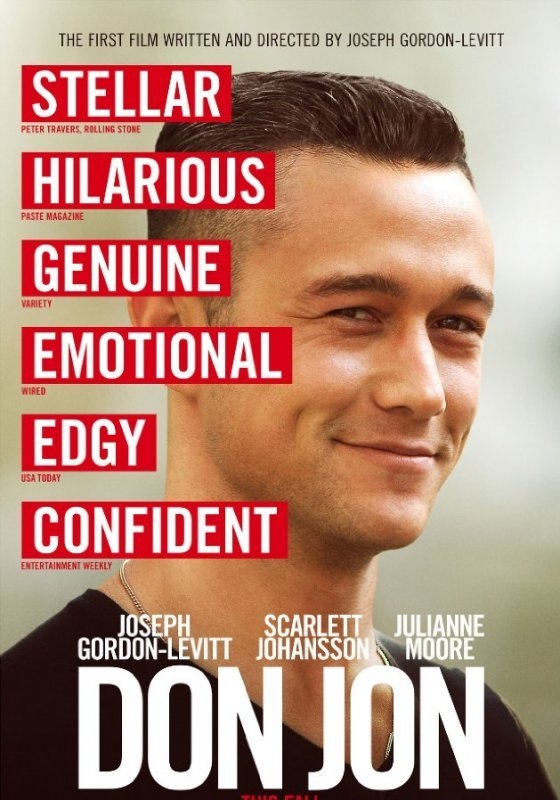 This review was first published on Steven’s website Popcornaddiction. If you don’t visit it you have only yourself to blame.

Jon (Joseph Gordon-Levitt) is house-proud, health-conscious and a reasonably devout Christian. He is also aggressive, promiscuous and addicted to pornography. While out one night drinking with his friends, Jon lays eyes on Barbara (Scarlett Johansson), and, convinced that it is love at first sight, tracks her down through Facebook and invites her out for coffee. A romantic who dotes on corny movies, Barbara attempts to change her new boyfriend, making him promise to never watch porn again and asking that he attend night classes to improve his career prospects, if they are to have a future together. It is at class that Jon meets Esther (Julianne Moore), a widow who he finds crying in a doorway on campus.

Ever since 3rd Rock From The Sun ended in 2001, Joseph Gordon-Levitt has gone to great lengths to prove himself as an actor capable of more than just high-concept television sit-coms. In the years since he has played a teenage dreamer, a space pirate, a gay prostitute, a high-school detective, a romantic lead, a cancer patient, a toy-box villain, a Looney Tune cyclist, a young Bruce Willis and a boy wonder. Here, however, he makes his biggest leap yet — not just re-inventing himself as a keep-fit, clean-freak porn addict but as a director, too.
Don Jon marks Gordon-Levitt’s directorial debut, yet the star — who also wrote the film, just in case you were still unconvinced by his talents — directs with such confidence that you could be forgiven for not realising it was a first-time effort. He has a visual style that is at times reminiscent of Edgar Wright or Danny Boyle (particularly whenever Jon opens his computer); only, instead of using the heightened atmosphere as a source of humour, Gordon-Levitt uses it to emphasise the absurdity of modern-day sexuality. A sexed-up advert for a fast food product contains the most ridiculously gratuitous montage you’ll have seen since Spring Breakers.

The script is incredibly layered, as Gordon-Levitt is clearly reluctant to limit his focus to the subject of pornography alone. The film is much more about connectivity, or the lack thereof in contemporary communication — and not just between the two sexes. Jon’s expectations regarding sex have obviously been warped by his browser history, but no more so than Barbara’s expectations of relationships have been warped by the movies she watches. Both have little time for other people, and they’re not the only ones: Jon’s dad watches television at the dinner table, while his daughter texts; his priest pays little attention to his weekly confessions, bestowing the same penance regardless of Jon’s sins; and his friends spend their time together talking superficially about nothing but girls. Enter Esther.

There is not a bad performance in Don Jon, with both Gordon-Levitt and Scarlett Johansson giving their respective parts their all. Jon could be mistaken for Joey from Friends c.1995, a greasy womaniser who is all white vests, hair gel and chat-up lines. Gordon-Levitt is clearly loving the opportunity to play a complete lech, but manages to redeem his character just enough in the later sections of the movie to make him at least passingly sympathetic. Johansson gets slightly less to work with, but still delights with the sleaziest performance since Nicole Kidman in The Paperboy. It’s Moore who really shines, however, arriving on the scene just as you are beginning to lose all hope. Essentially the only character in the film who is truly in touch with their own emotions, she is a breath of fresh air; one that has an almost transformative power on the film itself.

Despite its flaws, which in addition to Johansson’s underwritten role also include a first act that is difficult to engage with and an unexpectedly low gag-rate, Don Jon is an astonishing success, with Gordon-Levitt impressing as an actor, writer and director. The question for the one-time Tommy Solomon now is: what next?

Previous: The Butler
Next: Dom Hemingway