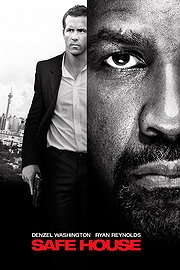 Denzel Washington is one of my favourite action/thriller stars, full stop. His work with Tony ‘Top Gun’ Scott alone would be enough to secure him a place in the Badass Hall of Fame, and despite being nearly 60 he’s still doing all his own stunts and breaking extras’ necks like you don’t even know. And just as if that wasn’t enough reason to be psyched about Safe House (and it basically is – look at Unstoppable, the man’s a machine), Ryan Reynolds is in it too. Lovely Ryan, Ryan from Buried, Ryan from all those films that weren’t good enough for him. Is this when you come of age, Ryan? Will Denzel lead you into the light? Oh, apparently not. Suave Black Guy (Washington) is in South Africa to conduct what looks like a very dodgy deal with Suspicious English Fellow (Liam Cunningham). They make the trade, but before you can say “oh shit, it’s mercenaries” some mercenaries turn up and start getting their kill on. Suave Black Guy winds up next to the US Embassy, and reluctantly evades his pursuers by walking in. “My name,” he says, “is Tobin Frost.” Assuming you’re not a CIA bigwig like Brendan Gleeson or Vera Farmiga, this name may need a little explaining – Frost is a notorious ex-agent who went rogue nine years previously and has been selling out the agency ever since. He needs to be pumped for info, stat.

Meanwhile, Matt Weston (Reynolds) has just checked in for another day at work; not working for an NGO, as his pretty French girlfriend thinks, but acting as ‘housekeeper’ for a CIA safe house in Cape Town. He’s been in the same dead end position for a year and nobody’s ever checked in – until today, when a heavily armed CIA team bundles a hooded man into the hyper-secure hideout. Ambitious and well-versed in Agency lore, Matt recognises Tobin Frost immediately – and is deeply concerned when team leader Kiefer (Robert Patrick) summarily begins to waterboard the rogue agent. Fortunately (sort of), those pesky mercenaries turn up again and Matt is torn between his distaste for Frost and his prime directive: ‘you must protect your houseguests’. Escaping with his manacled prisoner in tow, Matt attempts to go off the grid until he can turn Frost in – but Frost has other ideas… If you’re the sort of person who really gets off on dross like Killer Elite, then you’ll probably love Safe House – there are car chases, gun battles, people diving through windows and subsequently getting stabbed with bits of window and even the occasional truck blowing up. Ace. Unfortunately, that’s more or less all that happens in Safe House – and to add insult to injury, the endless fight scenes are choppy and impossible to follow. There’s a plot of sorts, but a shocking amount of it (leaked data, apparently helpful CIA bigwig who’s actually running the villains, showdown at a sports stadium, rooftop sniper…) is lifted from the frankly unforgivably Abduction. Being less original than Abduction is not a good sign, guys.

That said, it’s not all bad – Washington and Reynolds both deliver solid (albeit underwritten) performances, with Reynolds’ gradual realisation that there’s less room for idealism in his job than he’d assumed reminiscent of Ryan Gosling’s superb turn in The Ides of March. Brendan Gleeson was obviously having a super time growling around the corridors of Langley, although I must say I’m at a loss as to why Vera Farmiga took such an insipid role – for such a famously discerning actress, this was a real bum note. Genre devotees may find something to enjoy in Safe House, but for the rest of us this dense, dull film is anything but the “adrenaline-packed thrillride” that Nuts will probably claim it is. Ryan, Denzel, you’re both better than this… check back with us before you sign up for another thriller, mmkay?

Previous: TGIM! Films at The Yard hosts Rooftop Film Club from 29th February
Next: Jonah Hill and James Franco to star in A True Story