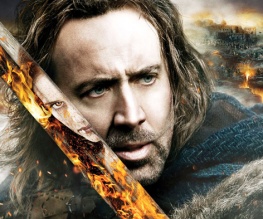 I’ve got a theory. There has to be at least one person in the world who enjoys sword-and-sorcery films, right? Not enjoys zoning out in front of them or enjoys taking the piss out of them, but genuinely thrills and chills to the endless macho adventures of idiots with big sharp metal clubs and dubious attitudes towards women/foreigners/other humans. It may be that there’s just one crazed billionaire hiding in a ruined mansion, pumping hundreds of millions of dollars into film after dreadful film in a vain attempt to sate his lust for long dirty hair and impractical swordplay. If there is such a man, and he is responsible for the sprawling mess which is Season of the Witch, the best I can wish for him is an early death.

Crusader knight Behmen (Cage) and his devoted wingman Felson (Perlman) have spent the best years of their life battering seven kinds of hallelujah out of every infidel between here and Jerusalem, but when Behmen becomes disillusioned with the church’s gung-ho enthusiasm for slaughter they defect and begin to wend their way home through non-specific medieval Europe. However, when they enter the city of Generic two things happen: they learn of a Hideous and Medically Unsound Plague which has blighted the land thanks to a marauding witch, and the nondescript bird symbol on Behman’s sword somehow identifies them – to a child – as deserters. Needless to say, this is not ideal.

Fortunately, Behmen’s got some unresolved guilt issues about stabbing a teenage girl (as one might), so he jumps at the chance when ailing and be-tumoured Cardinal d’Ambroise (Christopher Lee) offers them absolution in return for taking the ‘witch’ to a monastery containing the last copy of a book capable of purging her soul. Behmen assembles a crack squad (witch in caged wagon – tick! grieving knight – tick! altar boy with mad skillz – tick! scoundrel guide – tick!) and heads into the unknown. Will the mysterious girl in the cage turn out to be a witch? Will Behmen find solace in his penance? Will Ron Perlman’s face ever stop looking like a whole gammon? Ooh…

I’m truly sorry if you were planning to see Season of the Witch, but I’ve outlined most of the plot above. Once Behman and Co. leave Generic City they experience what is essentially a Dungeons and Dragons road trip before finally making it to the monastery where shit gets real, CGI gets criminally overused and several people get stabbed to death. Cue credits. For a film which has been kicking around Hollywood for eleven years, everything about it is awe-inspiringly lazy – the plot is utterly linear, the dialogue is as wooden as the thousands of massive trees which constantly crowd the screen, and the climax is just insane – not in the “Ooh, I’m mad, me!” sense, but properly redolent of mental illness.

The shame is that there are several really decent performances hiding knee-high in Nicolas Cage’s headlice, amongst the reels of wasted celluloid. Ron Perlman is direct and almost charming as the thuggish sidekick despite having some of the worst lines, and Robert Sheehan (Nathan from Misfits) is earnest and convincingly nervy as squire and wannabe knight Kay. Claire Foy’s first big-screen role as the witch (or is she?) is similarly well-observed, blending fragility with gleeful manipulation as she flits between scared little girl and something altogether more sinister.

Unfortunately, however, both Cage and director Dominic Sena (Gone in Sixty Seconds) take their absurd jobs – respectively, ‘charge around on a horse’ and ‘tell Nic Cage to charge around on a horse’ – far too seriously, robbing the film of any chance of salvation through self-aware melodrama and silliness. At best, Season of the Witch could have been enjoyably stupid – in the event, it doesn’t even manage that. It’s just embarrassing.